Himalayan Salt Lamps are carved out of the Himalayan salt mines. They are natural negative ionizers and dehumidifiers.

The air around us is filled with electrically charged particles. Positively or negatively charged, they are called ions, continually occurring in the atmosphere. They must be kept in balance.

Negative ions are air molecules created naturally in lightning storms and rainstorms, next to waterfalls and near strong waves, by means of sunlight and wind; they are abundant in forests, in mountain areas and in proximity of water. This is why we feel energized in fresh country air or by a waterfall. Research conducted in the last decade concluded that negative ions have a positive effect on health like improving mood swings, relieving seasonal depression, fatigue, stress and headaches as they affect oxygen and serotonin levels in the bloodstream.

Dr Albert P. Krueger, microbiologist and experimental pathologist at the University of California, stated: “an astonishing small quantity of negative ions could kill bacteria and quickly take them out of the air so they were less likely to infect people.”

However, the environment we live in today has far more sources of positive ions than in the past, creating an electrical imbalance in the air and in our bodies. We are exposed to 20 times higher frequency patterns than normal. Excessive positive ions are produced by the discharge of high-voltage networks, air conditioning, microwaves, TVs, radios, radar systems and computers.

The most dangerous levels of positive ions occur in highly populated and polluted cities. Exhaust fumes from cars, factory smoke, cigarette fumes, dust, radiation, as well as harmful chemicals, toxins and electromagnetic disturbances, all combined, create a potent source of positive ions that gradually build up and deteriorate our health. They can damage cells and are believed to be a major reason for an accelerated aging process and cancer.

To neutralize the harmful effects of excessive positive ions in our surrounding, putting a salt lamp in every room is highly advisable. 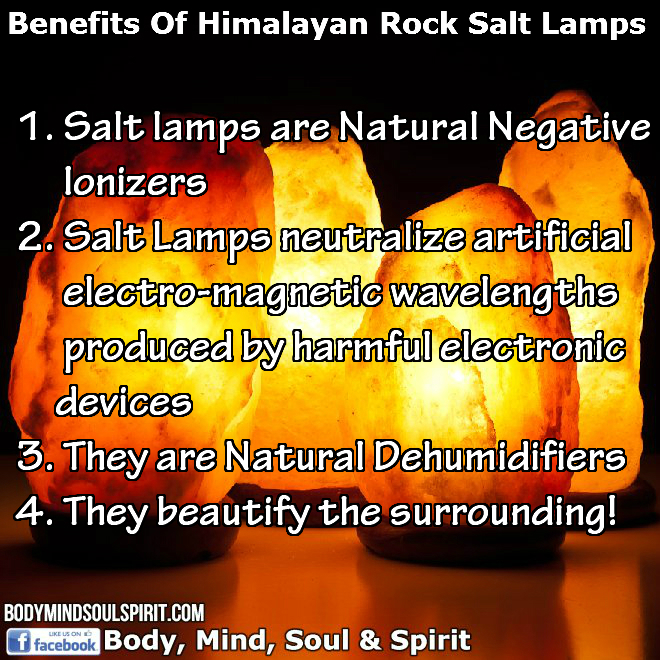 1. Salt lamps are Natural Negative Ionizers: The heated salt crystal absorbs the water molecules from the ambient air and evaporates them, a process during which negative ions are released abundantly, creating a healthier, more balanced atmosphere.

2. Salt Lamps neutralize artificial electro-magnetic wavelengths produced by harmful electronic devices surrounding us that cause nervousness, insomnia and lack of concentration. They amplify the natural frequency of 8 to10 cycles per second in the human brain, which is the normal resonance synchronized with the resonant frequency of the planet’s electro-magnetic field (7.83 Hz or cycle per second) and stabilize alpha wave rhythms in our brain.

3. They are Natural Dehumidifiers: Salt is hygroscopic, naturally attracting moisture. It absorbs the excess humidity in any given room creating a dry environment, while killing bacteria and other microbes. Therefore, salt lamps help purify the ambient air, while eliminating bad odors in the process.

4. They beautify the surrounding as they create a relaxing atmosphere promoting stress reduction, better sleep and an overall sense of well being. 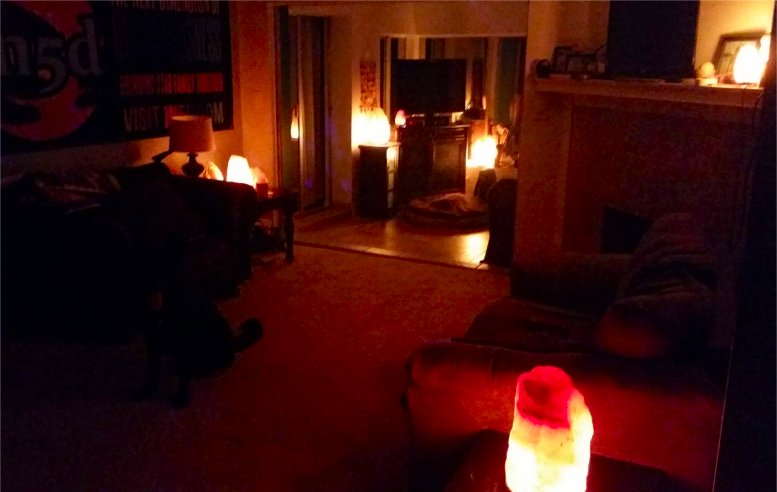 Numerous health benefits are gained from Himalayan Salt Lamps: they enhance the immune system, reducing susceptibility to colds and flu. Having them in your vicinity helps clear the sinuses, eases up migraines, headaches, allergies and hay fever. They improve lung capacity preventing respiratory-related illnesses and soothe asthma attacks. They increase alertness and productivity as well as concentration, healing fatigue and depression syndromes.