Halloween – short for All Hallows’ Eve – is an astronomical holiday. Sure, it’s the modern-day descendant from Samhain, a sacred festival of the ancient Celts and Druids in the British Isles. But it’s also a cross-quarter day, which is probably why Samhain occurred when it did. Early people were keen observers of the sky. A cross-quarter day is a day more or less midway between an equinox (when the sun sets due west) and a solstice (when the sun sets at its most northern or southern point on the horizon).Halloween – October 31 – is approximately midway point between the autumn equinox and winter solstice, for us in the Northern Hemisphere.

In other words, in traditional astronomy, there are eight major seasonal subdivisions of every year. They include the March and September equinoxes, the June and December solstices, and the intervening four cross-quarter days.

Halloween is the spookiest of the cross quarter days, possibly because it comes at a time of year when the days are growing shorter. On Halloween, it’s said that the spirits of the dead wander from sunset until midnight. After midnight – on November 1, which we now call All Saints’ Day – the ghosts are said to go back to rest.
The October 31 date for Halloween has been fixed by tradition. The true cross-quarter day falls on November 7, representing a discrepancy of about one week. According to the ancient Celts, a cross-quarter day marks the beginning – not the middle – of a season.

The Pleiades connection. It’s thought that the early forbearer of Halloween – Samhain – happened on the night that the Pleiades star cluster culminated at midnight.

In other words, the Pleiades climbed to its highest point in the sky at midnight on or near the same date as this cross-quarter day. In our day, Halloween is fixed on October 31, though the midnight culmination of the Pleiades cluster now occurs on November 21. 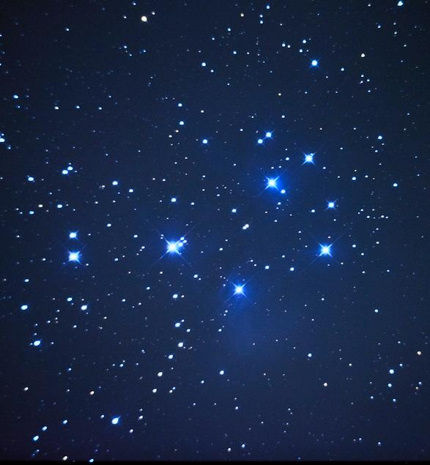 © Flickr user Dave Dehetre
The Pleiades star cluster, also known as the Seven Sisters. This tiny, misty dipper is easy to pick out in the night sky.

Presuming the supposed connection between Samhain and the midnight culmination of the Pleiades, the two events took place on or near the same date in the 11th century (1001-1100) and 12th century (1101-1200). This was several centuries before the introduction of the Gregorian calendar.

Bottom line: The present date for Halloween – October 31 – marks the approximate midway point between the autumn equinox and the winter solstice. Halloween is one of the year’s four cross-quarter days. It is the modern-day descendant from Samhain, a festival of the ancient Celts and Druids. The Pleiades star cluster also plays a role in this story, because Samhain was said to happen on the night that the Pleiades star cluster culminated – or reached its highest point in the sky – at midnight.