A nuclear reactor started life on Earth billions of years ago, claim scientists

According to scientists, there were NUCLEAR REACTORS on Earth long before there were any humans on the planet, and one of those nuclear reactors may have been responsible for our ENTIRE existence.

How’s that for science?

Scholars are still unsure as to how exactly life on Earth started. Despite the fact that we have quite a few promising leads, we aren’t really sure as to what exactly created life on our planet.

Now, a new study presented in Geoscience Frontiers challenges popular theories on how life on Earth came to be. (Nuclear geyser model of the origin of life: Driving force to promote the synthesis of building blocks of life=

According to Japanese scientists, a nuclear reactor that existed on Earth billions of years ago kick-started life.

And while some may consider this outlandish, the new study is being considered as one of the most plausible ideas to date—and one that could also help explain Alien life elsewhere in the solar system and universe.

According to experts, shortly after our planet was created some 4.5 billion years ago it began to cool down.

Despite this fact, it still remained a relatively hellish place. Oceans on Earth hadn’t’ still taken shape, and water remained as a superheated gaseous vapor for several hundred million years to come. During this time, asteroids and comets impacted Earth on a regular basis. 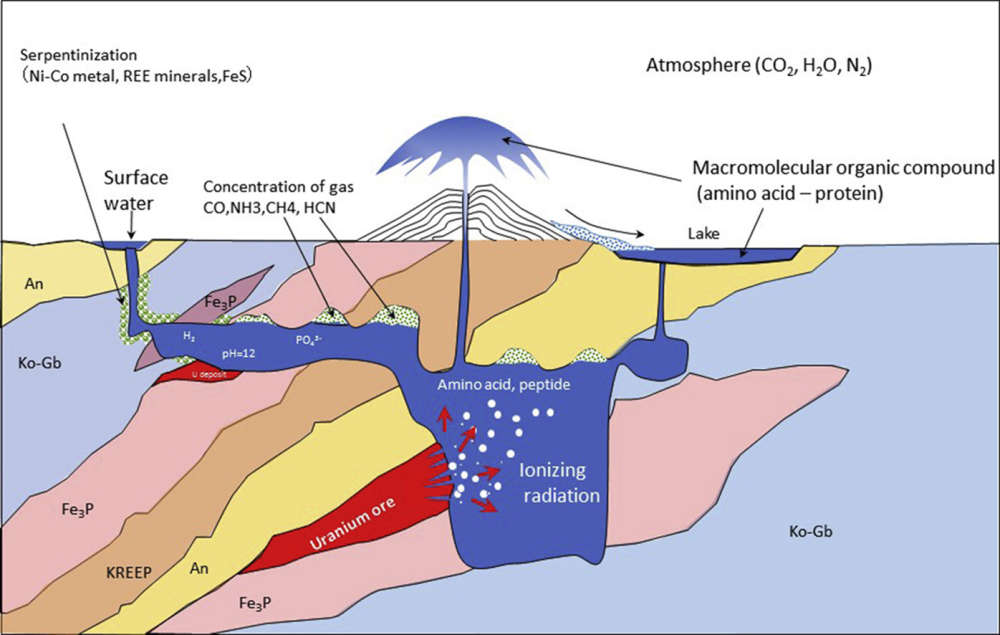 During the Hadean, Earth had much more uranium-235 than it has today. This element decays, which in turn releases radiation and heat at a constant tick.

This heat, note experts, is not insubstantial as it plays a huge role in alien worlds and moon in our solar system like Pluto, and even Saturn’s moon Enceladus—both celestial bodies believed to contain cryovolcanic features.

Scientists note that on our planet, around 50 percent of the heat that helps generate volcanism and the movement of tectonic plates originates from radioactive decay.

Furthermore, this exact radiation, given off by the isotopes was the perfect requirement to promote chemical chain reactions, like those that eventually lead to the creation of amino acids, RNA and DNA.

In the new study, scientists from the Riken and the Tokyo Institute of Technology say how this exact heat source helped fuel geysers rich in organic chemistry.

Experts from Japan came up with a mathematical model based on the best available evidence to them.

One of the data sets used came from the Miller-Urey experiments. Conducted from 1952 onwards. Miller and Urey demonstrated that several organic compounds could be formed spontaneously by simulating the conditions of Earth’s early atmosphere. Adding spark to stimulate lighting strikes, they discovered how amino acids spontaneously appeared.

Now, experts from Japan note how their study offers evidence that energy of the lightning strikes is nearly identical to their proposed U-235 nuclear reactor and that unlike lighting which is sterilizing, radiation is able to provide a slow steady heat source.

While ‘radiation’ is considered a life killer by many, it’s remarkable to place it into a category of necessary phenomena that helped kick start life on Earth.