Forget Planet 9—There is evidence for planet TEN

According to recent announcements, a TENTH planet—the size of Mars is lurking at the edge of our solar system. Scientists discovered that the orbits of Kuiper Belt Objects incline on average, to about 8 degrees with respect to the invariable plane. In other words, something of unknown origin is altering the average orbital plane in the outer solar system.

According to astronomers, the ‘planetary mass object’ seems to be affecting the orbits of other smaller bodies located within the Kuiper belt.

Planet TEN is very different from planet NINE—a supermassive planet said to orbit the sun from the other edges of our solar system.

Evidence for planet nine was announced back in 2016 when astronomers from Caltech in California came across numerous astronomical objects with highly erratic orbits.

Hey, if there could be Planet Nine, Planet Ten, there might as well be Planet Eleven, twelve and thirteen as far as we know, right?

Anyway, according to a new study, Kat Volk and Renu Malhotra, both from the Planetary and Lunar Laboratory at the University of Arizona, present very convincing evidence of the existence of planet ten—a celestial body the size of Mars—located in an orbit beyond Neptune.

According to the authors of the research, the mysterious planet has revealed its presence through its control over the orbital planes of a population of space rocks known as KBOs, or Kuiper Belt Objects, in the icy outer regions of our Solar System. 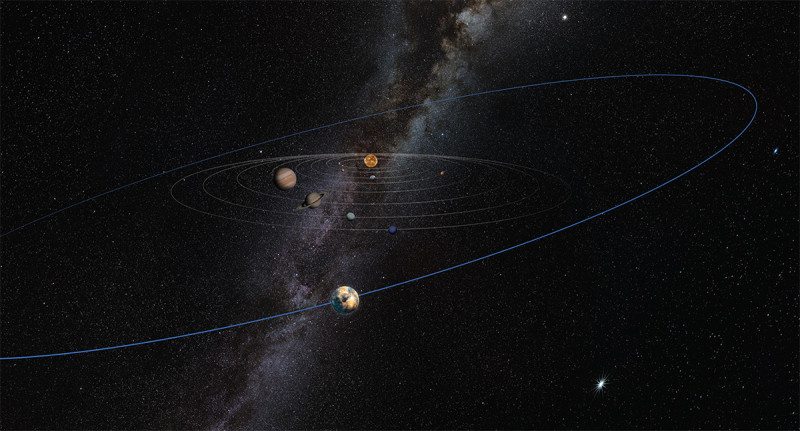 Could Planet Ten be lurking out there?

The Kuiper belt was named after Dutch-American astronomer Gerard Kuiper, though he did not predict its existence. In 1992, 1992 QB1 was discovered, the first Kuiper belt object (KBO) since Pluto. Since its discovery, the number of known KBOs has increased to over a thousand, and more than 100,000 KBOs over 100 km (62 mi) in diameter are thought to exist.

While most of the KBOs (which are debris left over from the formation of the Solar System) orbit around the Sun with orbital inclinations that do not depart from the average of what astronomers call “the invariable plane” of our planetary system, some objects farthest from the Kuiper belt behave in a very different way.

In fact, Volk and Malhotra discovered that their orbits incline, on average, to about 8 degrees with respect to the invariable plane. In other words, something of unknown origin is altering the average orbital plane in the outer solar system.

“The most likely explanation for our results is that there is some unseen mass,” lead author Volk said. “According to our calculations, something as massive as Mars would be needed to cause the warp that we measured.”

According to Volk and Malhotra, there’s a celestial body the size of Mars located around 60 AU from the sun, that influencing KBOs located at around 10 AU at either side of it.

“The observed distant KBOs are concentrated in a ring about 30 AU wide and would feel the gravity of such a planetary mass object over time, so hypothesizing one planetary mass to cause the observed warp is not unreasonable across that distance,” Volk said.

However, another theory is that a start that passed near our solar system at some point knocked the KBOs out of alignment.

“Once the star is gone, all the KBOs will go back to precessing around their previous plane,” Malhotra said. “That would have required an extremely close passage at about 100 AU, and the warp would be erased within 10 million years, so we don’t consider this a likely scenario.”

Planet 10? Another Earth-Size World May Lurk in the Outer Solar System

ewao
share
Previous post The Alchemists Dream: Scientists Find Bacteria That Transforms Toxins Into Gold Next post Viral Image Of Calm Dad And Screaming Baby Holds A Valuable Parenting Lesson We Can All Learn From