Meet the legendary Sun Temple of Konark, a ancient wonder of the world

The Konark Sun Temple (also called the Black Pagoda or Temple of the Sun) is a Hindu temple located in the locality of Konark, in the state of Orisa (East India).  The temple complex was built in the shape of a gigantic chariot, adorned with massive, elaborately carved stone wheels, pillars and walls. A major part of the structure is now in ruins.

It was built in the middle of the thirteenth century in the so-called Orisa style and abandoned since the 16th century.

It was declared a World Heritage Site by UNESCO in 1984.

The name Konark derives from the combination of the Sanskrit words, Kona (corner or angle) and Ark (the sun), in reference to the temple which was dedicated to the Sun God Surya.

The Legend behind the creation of the temple is extremely interesting.

According to legend, Prince Samba – son of Krishna and Jambavati – had ridiculed the flying sage Nārada, a rather ugly saint.

The latter took his revenge by telling Samba of a place in the river where numerous women bathed, having stripped of their saris (Hindu robes). 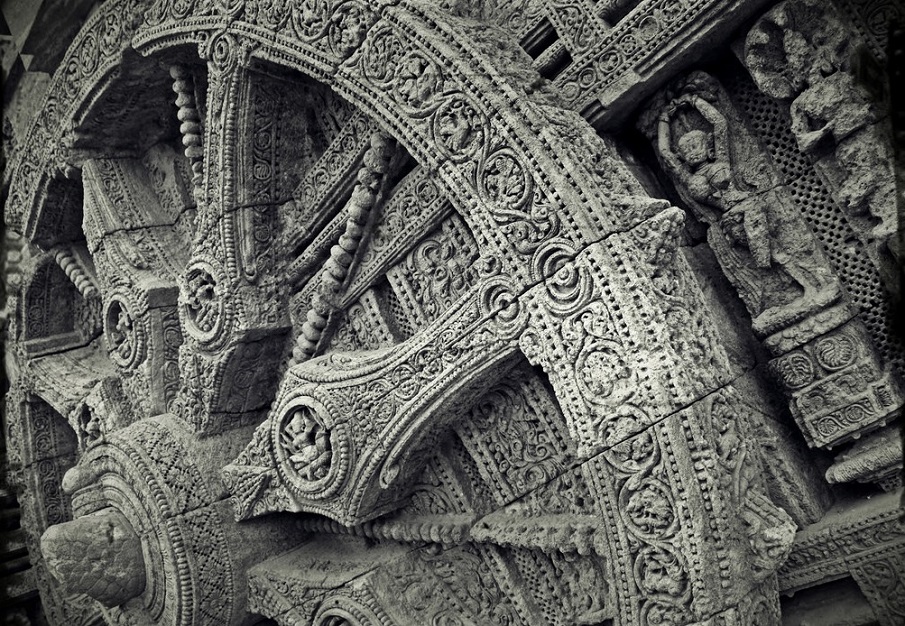 While the young man enjoyed the spectacle, Krishna, warned by Nārada, arrived and discovered how his son looked at his mothers (16,108 Krishna’s wives) while they bathed.

Furious, the god punished his son by inoculating him with leprosy.

Later, Samba showed him that Narada had manipulated him, but Krishna could no longer remove his curse.

Then, the young man traveled to see Suria, the God who heals all diseases, particularly those of the skin – and discovered to the north of Puri an image of the sun god sitting on a lotus flower.

He settled in the place and did a penance of twelve years, at the end of which he was cured.

In gratitude, he erected a temple, the first that was built on the site of Konark.

It seems that this legend is the local transposition of another legend that said these legendary events would have happened where there is also a temple of Suria, in the old Mula Samburu (present Multán, in Pakistan), by the river Chandra Bhaga (today called Chenab, tributary of the Indus river, in the Panyab).

When the Konark site of Orissa became a major center of veneration of Suria, the legend was relocated here to legitimize the place. 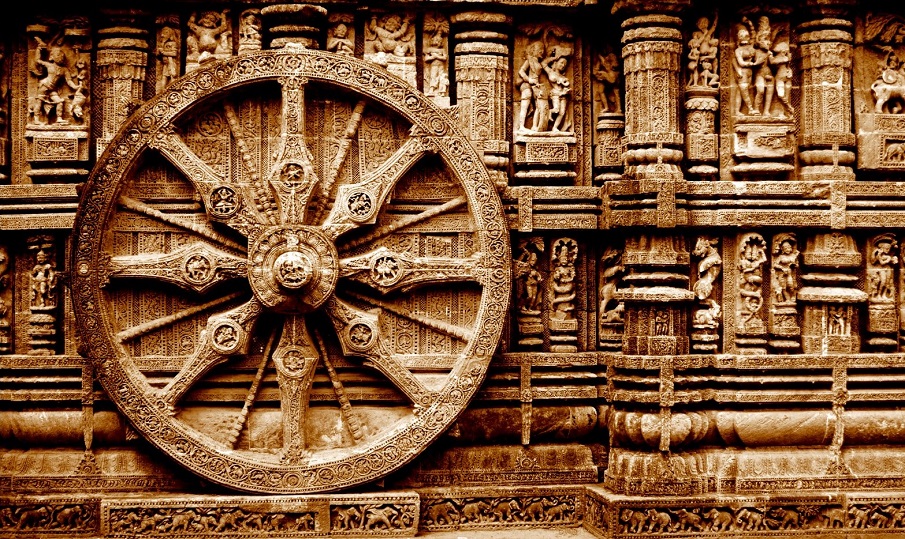 One of the 24 wheels of the temple.

The amazing Temple of the sun

The temples structures are oriented East-West, the direction of the solar path. The main temple is a horse-drawn cart and mounted on 24 wheels.

Interestingly, the wheels of the temple are sundials which can be used to calculate time accurately to a minute.

Looking back at history we find that there may have been a sun temple in the region earlier than the current one, dating to the 9th century or earlier. According to Bhavishya Purana and Samba Purana there may have been three sun temples at Mundira (possibly Konark), Kalapriya (Mathura), and Multan.

According to the Madala Panji—a chronicle of the Jagannath Temple, Puri, Odisha, India—there was another temple in the region. It was built by one Pundara Kesari. He may have been Puranjaya, the 7th-century ruler, of the Somavasmi Dynasty.