Recent Out of Africa Theory Proven Wrong by Australian Discoveries

The evolutionary origins of modern humans and the mapping of ancient hominin migrations across the planet are matters almost always in flux. With only limited and fragmentary physical evidence available, it has proven incredibly difficult to pin down the definitive narrative of the human story. Perhaps the most prominent claim to whether the last three decades largely unchanged is that around 70,000 years ago modern humans began to migrate out from their homelands in sub-Saharan Africa to colonize the world beyond.

The “Recent Out of Africa Theory” remains at the core of most consensus models tackling human origins and migrations, but in the background, a series of discoveries are threatening to consign this theory to the garbage bin of history. Most of the contrary evidence is emerging from studies focused on the largely sidelined (from a palaeoanthropology perspective) continent of Australasia. 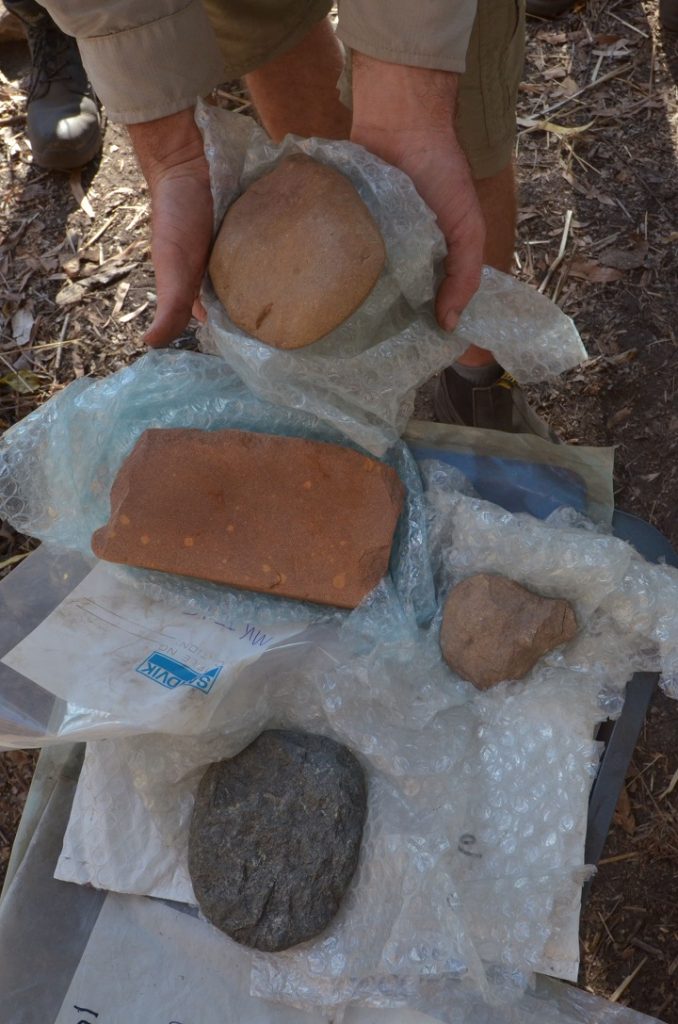 Three axes from different layers of the site and a rectangular sharpening stone from the 65,000-year level

Until around eight months ago, the scientific community was in broad agreement that the first humans to reach Australasia had walked from Africa, probably close to 60,000 years ago, and finally sailed through Indonesia to the continent’s shores 50,000 years ago. This scenario certainly seemed to fit well with the overall expectations of the recent out of Africa model and seemed to embrace most of the available evidence. Then came the announcement of a 65,000-year-old Aboriginal site at the Madjedbebe rock shelter in the far north. Some of the associated stone artefacts mentioned in the paper that was published in Nature in July 2017, “Human Occupation of Northern Australia by 65,000 years ago,” produced dates closer to 80,000 years.

“People got here much earlier than we thought, which means, of course, they must also have left Africa much earlier to have travelled on their long journey through Asia and south-east Asia to Australia,” said the lead author, Associate Professor Chris Clarkson, from the University of Queensland.

There is no conceivable way in which the presence of humans in Australia 65,000 years ago can be explained by a migration moving slowly from Africa through Eurasia 60,000 years ago; even at the 70,000-year upper limit for dating this expansion, it simply does not make sense. Multiple genome studies have indicated that the ancestors of modern Eurasians diverged from their source population between 60,000 and 50,000 years ago.

Before going any further, it is essential to understand why the populating of Eurasia is understood to be the outcome of expansion from Africa; it’s all to do with modern Africans’ genes. The ancestors of all living Europeans and Asians carried the mitochondrial haplogroups (genetic markers) M and N; they also carried Y-chromosomal haplogroup CF. A sampling of modern African DNA revealed that the Eurasian haplogroups stemmed back to mutations which had appeared in the African genome around 70,000 years ago, respectively, these earlier haplogroups were mitochondrial DNA HgL3 and Y-chromosomal HgCT.

You are probably wondering what, then, is the problem with the above modelling; surely this DNA data offers definitive evidence of a shared African origin for all modern humans. The reason for extreme doubt is that the oldest sample of African DNA yet recovered is 8,100 years old. The lack of sufficiently old African genetic samples means we can’t use DNA to geographically place the ancestors of modern Africans living 70,000 years ago; they may have been living well beyond the African continent.

Researchers at the University of La Laguna have suggested that haplogroup L3 entered Africa during a migration, explained in a paper published in December, “Carriers of Mitochondrial DNA macrohaplogroup L3 Basic Lineages Migrated Back to Africa from Asia Around 70,000 Years Ago.” Though the authors of the paper still posit a possible earlier African origin for these migrants, they highlight another glaring anomaly within their data:

“The southern route hypothesis proposes that the Eurasian branches (M and N) of the macrohaplogroup L3 differentiated in or near the African continent and rapidly spread across the Asian peninsulas to reach Australia and Melanesia. Under this assumption, it is expected that, in general, coalescence ages of haplogroups should decrease from Africa to Australia. However, we have demonstrated that this is not the case. Just on the contrary, the oldest M and N haplogroups are detected in southern China and Australasia instead of India, and associations between longitudinal geographic distances and relative ages of M and N haplogroups run, against to expectation, westwards with younger haplogroup ages going to Africa.”

With confirmation that humans were already living in Australasia 65,000 years ago, and that these people carried the oldest variants of the haplogroups considered ancestral for all modern Eurasians, we can redraw the migration map. Somewhere between 60,000 to 50,000 years ago, people carrying the identified ancestral lineages began to move through Asia, heading westwards towards Europe and Africa, reaching these lands 45,000 years ago. These migrants are almost certainly Australasians; no other interpretation better fits the evidence.

Once we abandon the reliance upon modern DNA samples and instead focus on archaeology, paleontology, paleoclimate modelling and archaeogenetic data, the “recent out of Africa theory” is immediately displaced. We may well find that by the end of 2018 a far more harmonious consensus model involving a recent migration out of Australasia.

ewao
share
Previous post Get ready, Earth’s moon is about to do something it hasn’t done in more than 150 years Next post Expert Claims That We Were Brought to This Planet Thousands of Years Ago!