Answers to where mankind came from and who we are as a species, may all have been once stored in a Labyrinth in Egypt.

But we have no real idea if anything from history is a lie, or a truth.  What we must go on are the facts and stories passed down to us.  The Labyrinth of Egypt has many of these, and its finding may prove that we were wrong about everything.

You’ve heard of the Great Pyramids, rising from the heart of the desert.  And the temples and places of worship that the great Kings and Queens of Egypt built and revered.  But have you heard of the great Labyrinth?  The holder of the mysteries of ancient times and a place so great, to have caused pilgrimages by men of scholarly repute.

Probably not, as most information about it has been obscured.  Until they were found, most things spoken of this underground network were considered just rumors and myth.  Considered “lost” for centuries now, it may be time to shed some light on those myths.

What exactly was the Labyrinth? What did it contain?

“This I have actually seen, a work beyond words. For if anyone put together the buildings of the Greeks and display of their labours, they would seem lesser in both effort and expense to this labyrinth… Even the pyramids are beyond words, and each was equal to many and mighty works of the Greeks. Yet the labyrinth surpasses even the pyramids.” Herodotus (‘Histories’, Book, II, 148), “When one had entered the sacred enclosure, one found a temple surrounded by columns, 40 to each side, and this building had a roof made of a single stone, carved with panels and richly adorned with excellent paintings. It contained memorials of the homeland of each of the kings as well as of the temples and sacrifices carried out in it, all skilfully worked in paintings of the greatest beauty.”

Believed since the time of Herodotus in the fifth century B.C.E. to be the holding grounds of some of the greatest secrets in History, the Labyrinth has had its fair share of mystery and intrigue attached to it.  In fact, it is possible that these complex chambers and caverns held a sacred text detailing the civilization of Atlantis, but that conjecture has never been fully proven.

Before it disappeared, Herodotus was able to visit and record what he saw.  In his Histories Book, he described the location of the labyrinth as being “situated a little above the lake of Moiris and nearly opposite to that which is called the City of Crocodiles.”  And a further description of the place: “It has twelve courts covered in, with gates facing one another, six upon the North side and six upon the South, joining on one to another, and the same wall surrounds them all outside; and there are in it two kinds of chambers, the one kind below the ground and the other above upon these, three thousand in number, of each kind fifteen hundred. The upper set of chambers we ourselves saw…”

This description is said to be supported by a drawing of the Labyrinth by a 17th century scholar named Athanasius Kircher. 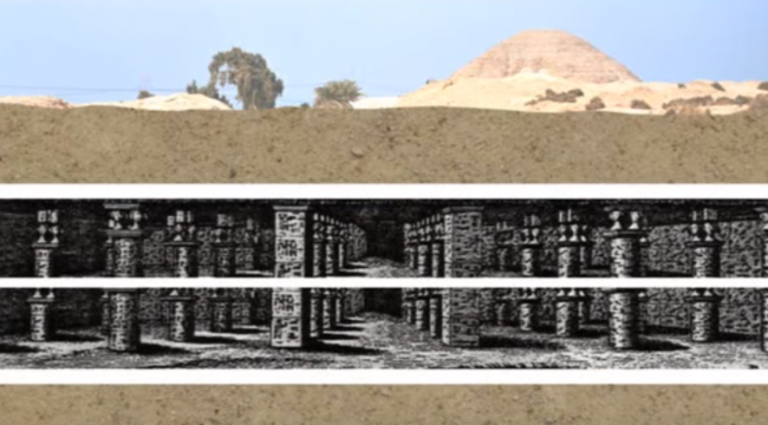 According to this drawing, and other reports outside of Herodotus, the Labyrinth was a temple that consisted of some 3,000 rooms, filled to the bring with paintings, hieroglyphs, and papyruses.  It was said to be 100 Km from Cairo, deep underground.  Researchers, who had been searching through these clues for many years to find the exact place, finally came across something rather wonderful in 2008.  The team was made of Belgium and Egyptian scientists, and while using new technology that could penetrate the ground and read what was under it, came across the temple close to the Pyramid of Amenemhat III.

It was quite a discovery, and was shared with the world without having to dig anything up.  The results were broadcast through the NRIAG Journal on Astronomy and Geophysics, and a public lecture held in Ghent, Belgium.  However, as the word started to spread, the Secretary-General of the Supreme Council of Antiquities in Egypt put the kibosh to the whole thing, as it was seen to threaten the security of the country.

Louis de Cordier, the lead researcher on the team, waited to hear from the council on whether or not he could proceed with investigations, but never did.  He created a website called Labyrinth of Egypt so that he could share the information he knew with the world, but it still hasn’t spread around.  No excavations have been conducted, and no grants have been offered for any further research.  It appears that this incredible complex from history is being protected, but there are no clear reasons why.

Perhaps it isn’t time yet for the world to know about its history?  Perhaps the people “in the know” don’t want everyone to get their hands on potentially damaging evidence.  Whatever the case, it makes you wonder why it hasn’t been talked about in history books and what other secrets are laying underground.

Here are a few videos that you can watch on the subject that might provide further evidence.  Decide for yourself what you think is going on.