During a routine survey of the coastline of Komandorsky Nature Reserve in Russia, researchers came across a rather bizarre discovery.

While performing excavations at the Kamchatka peninsula, Russian researchers found a headless skeleton of a 6-meter-long creature that has been extinct for more than two centuries.

Researcher Marina Shitova from the Komandorsky Nature Reserve noticed the dead creature’s ribs poking out from the sand and pebbles. However, they weren0’t sure what they had come across until excavations revealed 45 vertebrae, 27 ribs, a left scapula and other bones of an ancient—now-extinct—creature referred to as the Sea Cow.

“The discovery of such a sufficiently complete skeleton of Steller’s sea cow is an extremely important event not only for the Komandorsky reserve but for science in general,” read a statement by Russia’s Ministry of Natural Resources.

Despite the fact that the Sea Cow’s head is missing, the specimen is relatively well-preserved.

After excavating for four hours, the headless skeleton of the sea cow, a mammal endemic to this region that became extinct in the 18th century, was eventually revealed to the surprise of researchers.

This discovery could help researchers understand more about the extinct animal as researchers do not know how may vertebrae the Se Cow had, and what its flippers looked like, said Daryl Domning, a professor of anatomy and a Steller’s sea cow expert at Howard University in Washington, D.C in an interview with Live Science. 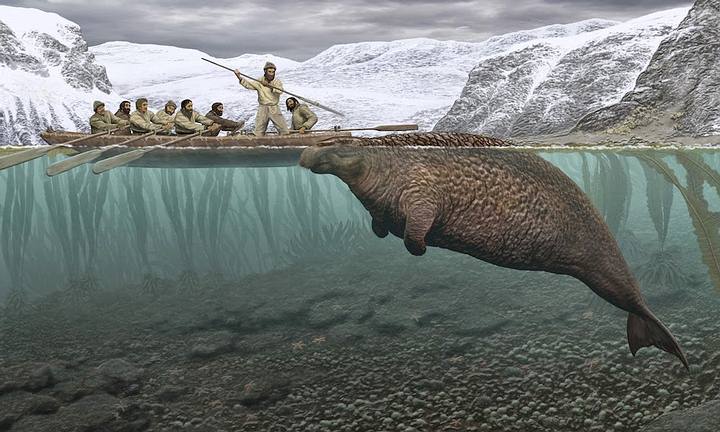 An illustration depicting how Sea cows were hunted, hundreds of years ago. Image by Carl Buell.

The sea creature was hunted in great numbers until its extinction in 1768.

“According to historical records, in the eighteenth century the species had declined to remaining populations only around Bering and Medni Island, Russia,” said researchers from George Mason University years ago, in the scientific journal Biology Letters.

The species was named after the German explorer George Steller, who first documented its existence during a voyage through the North Pacific in 1741, according to the Encyclopaedia Brittanica.

According to statements, the skeleton will go on display at the Komandorsky Nature Reserve visitor center.

The animal was huge in terms of weight. According to experts, the specimen could grow in weight to 10 metric tonnes, which eventually allowed it to survive without problems in the ‘frozen’ environment.

However, its incredible weight also made it ‘easy’ pray for predators and hunters, according to experts.

The last specimen—prior to this one—was discovered more than 30 years ago on Bering Island, in Russia.

What exactly happened to the head of the recently found Sea-Cow remains a mystery.