Ok, forget about Area 51, and meet the secret Air Force base in Ohio that according to a man who worked for 39 years at the base as an engineer, hides not only living aliens but alien technology and UFO’s.

Apparently, the TRUTH is OUT THERE. According to statements from a former Air Force Engineer who worked there for 39 years, a secret Base in Ohio is hiding the remains of the aliens that crashed in 1947 near Roswell. However, the former Air Force man also warns that the secret base is home for living aliens.

Apparently, there are more secret bases that are working with alleged alien tech than we’ve ever imagined.

A retired Air Force engineer—called Raymond Szymanksi—claims that there’s a secret base in Ohio which is home to alien tech and even live aliens.

According to Szymanksim aliens from the Roswell Crash of 1947 were transported to the Wright-Patterson Air Force Base (WPAFB) in Dayton, Ohio for inspection after the crash.

Ever since that date, they remained at the secret base in custody.

According to the claims made by Szymanksim, it was a mentor who described the tunnels that house the living and deceased aliens in the secret base to him. There are many secrets, and the deeper you go to more secretive it becomes.

In an interview with the Sun, Szymanski said that his mentor had approached him saying one day “have you heard about our aliens?” according to The Sun.

The aliens. their UFO and all of their technology were apparently translated to the secret Air Force base after the crash at Roswell. If this is proven accurate, not only would it mean that the government is in possession of advanced alien technology, but that the Roswell Crash in New Mexico was not a fabricated hoax, and that a real flying saucer did crash land there in 1947. 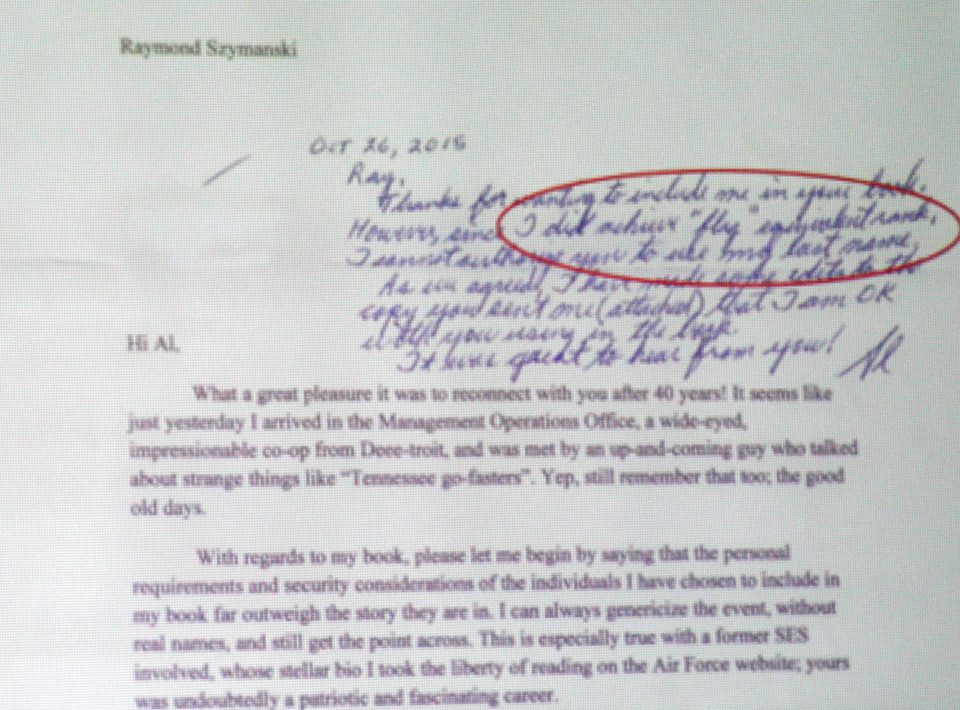 The former engineer also showed The Sun a note written by his mentor Al, where he is believed to have mentioned “flying”… Image Credit

“I was assigned to the Avionics Laboratory’s Management Operations Office to work with my mentor Al, an industrial engineering and MBA graduate. During my first week, Al provided me with some totally unexpected and unsolicited sage advice.”

“He said that in 1947 there was a crash down in Roswell and they brought the machines and the aliens here for inspection and said they keep them in secret tunnels under the base.

“When I asked him how he came to know about the secret, he responded, “Everybody who works on base knows.”

“I was stunned. Me, a young co-op student barely into his first week, was now initiated into a small select group of 10,000 people and given their most incredible secret ever – that we have aliens and their craft in our tunnels on our base.’”

After the incredible details Szymanski had come across, he started digging deeper into the subject and found that the Foreign Technology Division (FTD) on the base housed Project Blue Book, the Air Force’s official UFO investigation project from 1952 -1969.

Project Blue book was one of a series of systematic studies of unidentified flying objects (UFOs) conducted by the United States Air Force.

“For the next four decades I had dozens if not hundreds of brief conversations regarding the ‘secret’ I’d been given during my first week on base,” he said.

Szymanski has written a book on the topic called 50 Shades of Greys.