Ritualistic portals—Experts uncover the truth behind the 3,000-year-old structures of the Amazon

To this day, these geoglyphs are still venerated by the natives of the Brazilian state of Acre.

A group of scientists believes they have found an explanation as to why ancient Amazonian cultures created geoglyphs, earth trenches with geometric patterns such as squares, circles, ellipses, and octagons thousands of years ago.

“With ditches up to 11 m wide, 4 m deep, and 100–300 m in diameter, and with some sites having up to six enclosures, the geoglyphs of western Amazonia rival the most impressive examples of pre-Columbian monumental architecture anywhere in the Americas.”

According to a press release from the University of Helsinki, these formations, believed to be between 1,000 and 3,000 years old, had a metaphysical purpose and served for the worship of local indigenous peoples.

In their study, experts write: „Over 450 pre-Columbian (pre-AD 1492) geometric ditched enclosures (“geoglyphs”) occupy ∼13,000 km2 of Acre state, Brazil, representing a key discovery of Amazonian archaeology. These huge earthworks were concealed for centuries under terra firme (upland interfluvial) rainforest, directly challenging the “pristine” status of this ecosystem and its perceived vulnerability to human impacts.”

Until today, scientists have discovered about 500 Acre geoglyphs, named after Acre as most of them are found in this Brazilian.

These mysterious geometric shapes can be several meters deep and occupy areas of hundreds of square meters.

However, experts were unable to fully explain their purpose, who created them and what for.

As a result, researchers discovered that these enigmatic formations were important ritual spaces through which the indigenous peoples of the Amazon communicated with the spirits of their ancestors, as well as with animals and celestial bodies.

According to the study, these peoples did not make a distinction between themselves and nature, and these mystery shapes helped them remember that human life was indivisibly intertwined with the environment and with previous generations.

In a press release, scientists explained how “the geometric patterns inspired by characteristics and skin patterns of animals still materialize the thinking of indigenous people of Amazonia and are also present in their modern pottery, fabrics, jewelry, and arts. As the theories of Amerindian visual art also show, geometric patterns can provide people with desired qualities and abilities, such as fertility, resistance, knowledge, and power.” 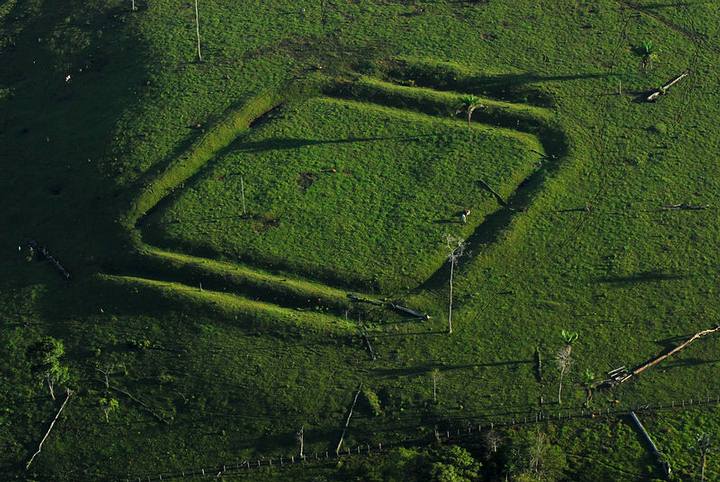 According to experts, “evidence for their ceremonial function is based on an almost complete absence of cultural material found within the enclosed areas, which suggests they were kept ritually “clean,” alongside their highly formalized architectural forms (mainly circles and squares)—features that distinguish the geoglyphs from similar ditched enclosures in northeast Bolivia.”

Furthermore, experts indicate in the study how “little is known about who the geoglyph builders were and how and where they lived, as contemporary settlement sites have not yet been found in the region. It is thought that the geoglyph builders were a complex network of local, relatively autonomous groups connected by a shared and highly developed ideological system.”

Contemporary indigenous peoples of the state of Acre still continue to protect these sacred formations and, unlike other inhabitants of the area, avoid using them for mundane activities such as housing construction or agriculture.

ewao
share
Previous post Space-X Recycled Rocket Goes to NASA Space Station and Back Again, Just the Beginning? Next post Amish People Have A Genetic Mutation That May Make Them Live 10 Years Longer