According to reports, the new analysis pays special attention to 77 sources that have not yet been identified by scientists.

A total of 77 unknown sources of gamma rays have been recorded in an extensive catalog of 7.5 years of observation of NASA’s Fermi satellite.

Some may come from sources never observed before.

During the 7.5-year-period, the Large Area Telescope (LAT) recorded a total of 4,547 bursts of gamma radiation, known as flares.

Thanks to improved analytical methods, Mateo Giomi of the German synchrotron laboratory DESY has been able to attribute these flares to 518 variable sources in his doctoral thesis.

The “Fermi Full Sky Variability Analysis” (FAVA) lists the 77 unknown sources, whose identity has not yet been determined.

The catalog is presented in The Astrophysical Journal. 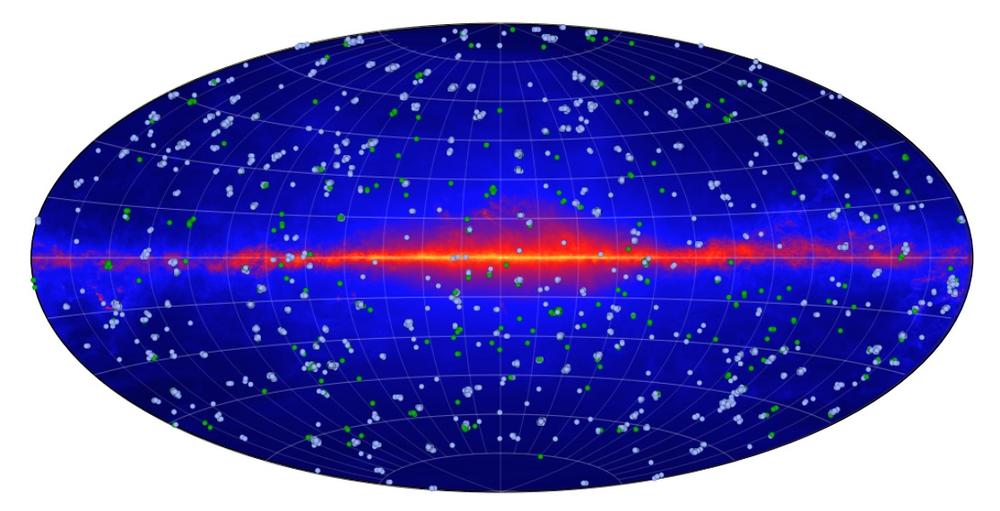 The gamma-ray sky as seen by ‘Fermi.’ Image Credit

“Most of the sources in the catalog are eruptions in extremely distant, so-called active galactic nuclei, but we also see binary star systems, involving white dwarfs and black holes, neutron stars, and other remnants of stellar explosions.”

In all cases, the reported gamma rays are believed to have been created by subatomic particles, which are accelerated to remarkably high energies by a range of different mechanisms.

The catalog will make it easier for astroparticle physicists to discover exactly how the different cosmic particle accelerators work.

“We see the particles while they are in the process of being accelerated, so to speak,” says DESY’s Rolf Bühler, who supervised the thesis.

“This gives us some clues about the acceleration process. For example, an accelerator cannot be greater than the distance traveled by light over the time span of the flare.”

The analysis pays special attention to the 77 sources not yet identified.

“In most cases, these will probably also be active galactic nuclei, but they could also include representatives of completely new kinds of gamma ray sources, which we have not seen before,” says Bühler, who compiled an earlier catalog of variable sources of gamma rays with some of his colleagues, based on just four years of working observations from Fermi.

These extremely short events, which can last from a few milliseconds to about a minute, are among the most powerful types of explosions in the universe, believed to have been created by the explosive death of a massive star.

Interestingly, these supermassive explosions give off as much energy in a few seconds as the sun in its entire 10 billion year lifetime.