Scientific research: Why did DAY become NIGHT during the crucifixion of Jesus?

Luke 23:44 “it was now about the sixth hour, and darkness came over all the land until the ninth hour. The sun was darkened, and the veil of the temple was torn down the middle…” 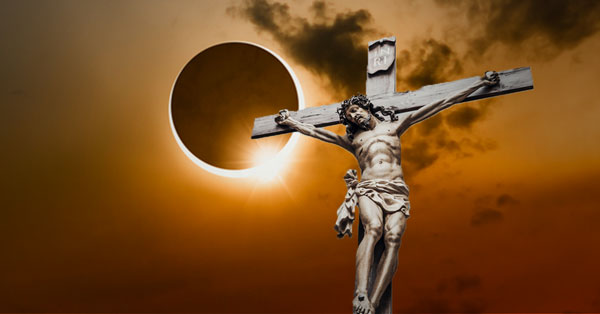 The so-called Eclipse of the century, which will happen August 21, 2017, will be visible from the United States, where the day will become completely dark due to the natural phenomenon.

A similar one, the total solar eclipse of June 8, 1918, crossed the United States from Washington State to Florida. This path is roughly similar to the one which will occur on August 21, 2017, and was the last time a solar eclipse totality crossed the nation from the Pacific to the Atlantic. The path of the eclipse will go from the U.S. state of Oregon in the west diagonally downwards towards the state of South Carolina, crossing important cities such as St. Louis, Missouri, and Nashville, Tennessee.

In connection to the Eclipse of the century, many began to wonder whether the Gospel account of the crucifixion, which describes a day that became dark, could have occurred due to a total eclipse of the sun, like the one that is approaching in August 2017.

The so-called Crucifixion darkness is an episode in three of the canonical gospels in which the sky becomes dark in daytime during the crucifixion of Jesus.

Furthermore, the oldest biblical reference to the crucifixion darkness is found in the Gospel of Mark, written around the year 70. In its account of the crucifixion, on the eve of Passover, it says that after Jesus was crucified at nine in the morning, darkness fell over all the land, or all the world from around noon (“the sixth hour”) until 3 o’clock (“the ninth hour”).

According to Luke 23:44 “it was now about the sixth hour, and darkness came over all the land until the ninth hour. The sun was darkened, and the veil of the temple was torn down the middle…”

It appears that Luke’s Gospel originally explained the event as an eclipse, but many scholars disagree. Many authors agree that the biblical details do not accord with an eclipse: as a solar eclipse could not have occurred on or near the Passover when Jesus was crucified and would have been too brief to account for three hours of darkness. The maximum possible duration of a total solar eclipse is seven minutes and 31.1 seconds.

The only total eclipse visible in Jerusalem in this era fell later in the year, on 24 November 29 CE at 11:05 AM.

Furthermore, according to Matthew 27:45, “From the sixth hour until the ninth hour darkness came over all the land.”

Although the words may be crystal clear to many, there are scholars who argue that it is not necessarily related to a solar eclipse. In fact, there are translations that do not mention an eclipse, but rather that the sun went completely dark.

Interestingly, several theologians claim that Jesus was crucified on April 3 of the year 33. According to historical documents and calculations based on Kepler’s equations, a lunar eclipse occurred on that day, and not a solar eclipse, which may have been visible from Jerusalem.

A digital recreation shows how the moon began to turn red at precisely 3 o’clock in the afternoon, the moment Jesus died.

It so happens that a lunar eclipse, presumably happened the day Jesus was crucified does not justify the three hours of darkness described by the Gospel during the event.

It is noteworthy to mention that no contemporary references to this darkness have been found outside of the New Testament. So the phenomenon that may have generated such an eclipse continues to be a mystery to science.