The 10 Most Dangerous Threats To Humanity

The world view about political leaders is as volatile as it was when I was first made known of its awareness. In the decade when I was born political strife like the Iranian Revolution, the Munich massacre and the Watergate scandal, were infamous because of the notorious individuals behind these atrocities. Today, they are new players in the game of bureaucratic chess, where the kings survive their created wars while sacrificing thousands of lives.
These ten people and organizations are part of a list of the notorious opportunists, that threaten the safety of humanity.

The 19th President of Syria, Bashar Al-Asad, is directly responsible for approximately 320, 000 murders of his people. 191,000 of these killings are confirmed, with more adding to the current list of deaths. Through the use of systematic executions, torture, and chemical warfare, this man just keeps giving the gift of killing. Victims included in his archaic torture tactics are children, women and the elderly. As a result of the current apartheid in Syria, 9 million refugees displaced throughout the Middle East.

Another President to watch out for is North Korea’s Kim Jong-un, affectionally called the Supreme Leader of the Asian country. Unlike its border brother South Korea, this pseudo-communist led state has endured enough mass murders to rival the Holocaust. The confirmed concentration camps that are still in use currently, have used millions of men, women, and children to their deaths for simply displeasing the leadership. The monarchy of the Kims dates back to the aftermath of the Korean War. The current regime leader has directly caused five ‘purges,’ killing over 340 people since his induction in 2011. Family members are not ruled out from his brutality. President Kim has mercilessly killed his uncle, who served under his father, the previous Supreme Leader, for allegedly planning a coup. Most executions are in front of family members. As for the rest of his citizens, prisoners are sentenced with their families, as the custom is to destroy up to 3 generations of family members. The number of deaths caused by the regime is in the mid-millions since the 1950s.

Moving into the another part of the world, Britain is the home of the oil conglomerate known as BP. Its origins date back to the turn of the 20th century. There headquarters on now in London, England.
The biggest problem of this company is its blatant disregard for both human and marine life. The memorable 2005 disaster in Texas City which killed people and injured 170 others was. What this company lacks in its death numbers, they more than made up for the ecosystem deaths, and damages caused by both the 2005 refinery explosion and the 2010 oil spill in the Gulf of New Mexico. So much so, the 4.9 million barrels worth of leaked oil from the oil rig alone can negatively alter marine life in the area for decades. Impacting the delicate ecology of deep oceanic systems, which affect marine life and upsets the balance. Regarding a domino effect, the imbalance of marine life escalates upwards to changing food supplies, rising global temperatures, and coral decrease which regulates marine populations. The blatant lying of the known impending disaster of 2010 shows the great lengths the company is willing to take to cover its hyde.

In the finance district cash is king and capitalists reign. On the list of crimes against humanity, this industry is not left out. Goldman Sachs was the company that was once revered and pedestalled as a world leader in Bank investment. In 2010, however, the company fell from its throne when it revealed to have participated in fraudulent behavior. In which preceded the economic destruction of the value of Europe’s collective dollar, the euro, and the collapse of world banks like the Lehman Brothers. Countries such as Greece felt the devastation, and the devaluation rapidly spread throughout the region, crippling global financial stability and ushered in a market crash that rivaled the 1920’s Dust Bowl. The selling of bad debt and then betting against it is reminiscent to the match-fixing in back alley boxing matches.

In the food industry, companies are trusted to oversee the welfare of the planet’s food supply. The safety of food production os the primary concern and this next company on the list abused this trust in exchange for high profits. Monsanto dubbed as the modern farmer got its start as a savior for the baby boomer housing crisis in the 1ate 1950s. What change the perception of the company was the genetic modification of the soybean seed, disrupting the farming industry. Historically, the 116-year-old organization was controversy involved in the production of Agent Orange as a chemical company. In hindsight, we should have seen the writing on the wall when the conglomerate became a leader in GMO seed production that crippled the industry with is patency piracy. Mainly, produce seeds patented by the corporation extends to the second generation and since one can’t tell which seed is modified and which is not, this means all seeds bought by farmers subjects the buyer to possible lawsuits of patent violation tying up victims in court proceedings for years. Moreover, farmers cannot avoid buying Monsanto product, strong-arming farmers to only produce Monsanto plant food. Sneaky Bastards.

America has its share of corrupt leadership that cause more harm than good. In U.S history, known for the monopolization of the pharmaceutical industry, the first American Billionaire used dirty political tactics such as discrediting of his competitors and paved the way to establishing the Tavistock Institute for Human Relations. This institution produced leaders that assumed roles in all industries that influence society. Perceived my most as the first steps of the New World Order concept because of the polemic message the Rockefellers constructed and force-fed to the masses through the media, government and medical fields. What makes this family even scarier is their unapologetic attitude of how the world dominance.

In the political arena, there is no shortage of individuals who mean to cause harm for personal gain in the guise of humility. However, some political scientists could care less about how conspicuous their actions are, as long as they reached their goal of self-edification. An example of deplorable political figureheads is the 94-year-old former United States Secretary of State
Henry Kissinger. It is no surprise he is a close acquaintance to the Rockefellers, as dubious people tend to stick together. His associations aside, Kissinger is responsible for the bombing of Cambodia and Laos during the Vietnam war, aided the Chilean coup in the early 1970s allowing a known dictator to take control of the country for two decades causing the decline of basic civil rights for its people. During the same decade, Kissinger supported the dictatorship of Yahya Khan in Bangladesh and India, which resulted in over half a million deaths through the systematic genocidal rape of its citizens, primarily women. During the Nixon administration, this German-born formal National Security Advisor reeked havoc behind the political scenes, yet he is a 1977 Presidential Medal of Freedom Awardee. His strong ties to politics perpetuate the rhetoric of the ‘never-ending-war’ concept.

Although his name is not yet iconic, his actions during then 2008 economic crisis following the deregulation of the U.S banking system which still affects today economic status. The removal of the Glass-Steagall Act is the catalyst of the issue and puts Summers directly responsible. The for Secretary of Treasury, bullied world governments to sign the Financial Services Agreement with the exception go Brazil. This deal pushed a substantial wealth transfer from the citizens to the bankers, making the latter richer, causing the economic divide to be even larger. In short, the rich get richer, and the poor get poorer.

This billionaire takes the cake when it comes to the art of manipulation. Soros is infamous for making a billion dollars in 24 hours manipulating the currency by way of inside trading. He single-handedly initiated the Britain’s financial crisis and causing the economic meltdown of Mayalsia in 1997, by dumping 10 billion sterling, thus devaluing the dollar, then betting against it gaining a profit. Soros is against sovereignty as a whole and has pushed for the New Order concept. He also fancies himself as a messianic figure with god-like attributes who promotes his radical agendas on American society. I guess destroying a government’s economic status could make you feel like God, in a sense, more like Satan! 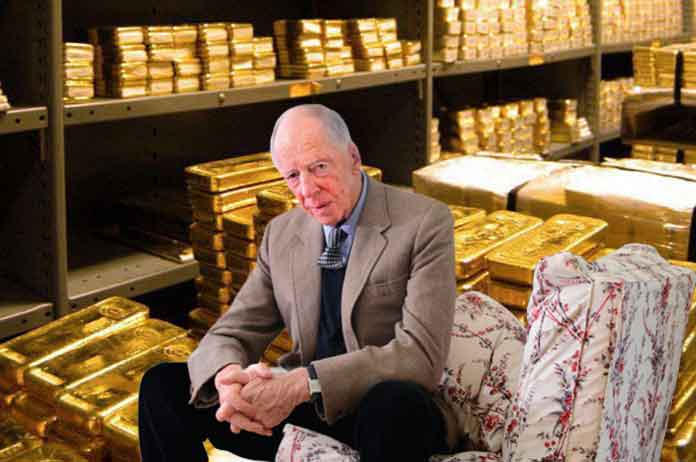 Owners of the majority of the world’s banks, the Rothschilds are one of the richest families on the planet, if not the richest. The International Monetary Fund and the World Fund are among their private institution collection of word banks. What is frightening about this family is the influence it has over American and International politics. Mainly, the power this family wields can, and has, made world leaders quake at their feet because of their potential for global economic destruction. Thus, putting them inadvertently above the law. The Rothschilds are the definition of meekness, and not in a Christ-like sense. It means that this family has the power to destroy our world, financially, but chooses not to. The Rothschilds potentially can destroy nations by religious rhetoric. Zionism is this family’s ideology which degrades the State Israel and the Jewish community. They have perpetuated wars in the Middle East and strife for the Palestine nation.

Which of these people strike you as the most fearsome to Humanity? Comment Below.

ewao
share
Previous post Pufferfish Goes Viral After Video Corrects Misconceptions About How They Inflate Next post Researchers Claim DMT Connects You To A Parallel Universe! (What You’re Not Being Told)