The Blueprint of the Gods etched in stone—an ancient alien architect?

No matter where we look, cyclopean masonry megalithic sites, and Pyramids are scattered across the entire planet. It’s as if thousands of years ago, all of a sudden, different civilizations across the globe decided to erect massive monuments, Pyramids, Temples, and cyclopean walls, and the same process is found on nearly all continents o Earth, and the similarities are unlike anything you’ve ever seen before.

From Mesopotamia to Mesoamerica, there’s evidence of a so-called ‘master builder.’

It cannot be a mere coincidence that thousands of years ago, nearly ALL ancient cultures decided to build massive, temples, massive pyramids and cyclopean walls that are so perfectly designed and built, that not a single sheet of paper can fit between them. In fact, these ancient structures were so precise and so wee-built, that they have managed to survive for thousands of years.

If we take a look at history, we will notice that for the past 5,000 to 8,000 years, ancient cultures around the globe experienced what I call a megalithic building era where different civilization—that according to mainstream scholars were never interconnected—started building similar structures throughout the world.

It was as if a building plague had struck them, and they created structures that repeat themselves over and over again in different places and different times.

But, if there are so many similar structures around the globe, who was the first one to build them? Who copied who? And better yet why?

If you research this subject, you will notice that it’s as if we are talking about the ‘same architect’ that seemed to have appeared on different continents around the globe but in different times.

When you notice the fact that for thousands of years, mankind erected nearly identical structures around the globe, then you understand that there is a relationship among them.

Pyramids are just one of the many examples of massive building projects that occurred on Earth thousands of years ago.

If you want evidence of a megalithic building era in our civilization, then the best structures to look at are Pyramids. They are found everywhere, in nearly every region of the world, including Central America, North America, Mesopotamia, Egypt, Asia, and even Europe. 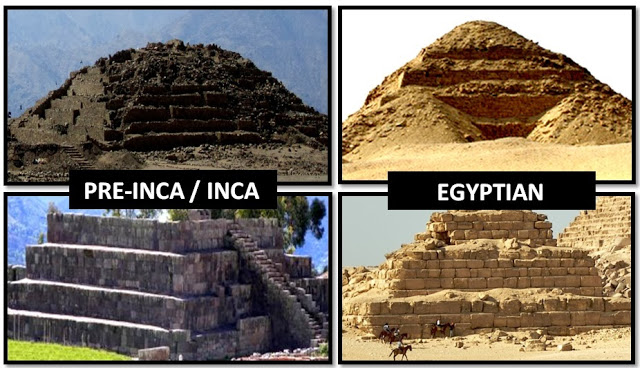 Megalithic construction was a global phenomenon that plagued ancient cultures around the globe, thousands of years ago.

It is not possible that cultures separated by thousands of miles decided to erect nearly identical structures by chance.

During a certain point in our history—which by the way was poorly documented, as we have absolutely no idea how ancient civilizations managed to erect some of the most incredible sites on the planet—ancient people somehow get motivated and found the necessary means to haul around gigantic blocks of stone with a weight between 20 tons, 200 tons, and erect some of the most impressive ancient sites on the planet.

If this was an isolated event that occurred on a certain continent it wouldn’t be such a shocking thing, but when you have the same thing being repeated over and over again you come to realize this megalithic phenomenon was not present in just one or two ancient civilizations, but in nearly all ancient cultures that existed on Earth.

This is why I ask: Are the enigmatic parallels between structures seen throughout the ancient world truly a random, isolated event? Or could they be interconnected somehow? And if they had some kind of connection, was it important not just that the temples were built in a similar way, but exactly how they were erected, and the function they served?