Just six miles from the ancient city of Urfa in modern-day Turkey we find the ruins of an ancient monument built some 12,000 ago by a group of mysterious builders: the complex of Göbekli Tepe.

While experts have managed to excavate a large amount of this ancient site, buried in the distant past for reasons unknown,  to date experts have still NO IDEA who built this massive, fascinating site believed to be around 6,500 years older than Stonehenge and around 7,000 years older than the oldest of the Pyramids. Now experts have uncovered skull fragments with enigmatic engravings on their surface, making the enigmatic site even more mysterious.

The ruins of Göbekli Tepe are recognized as the oldest place of worship built by mankind. Its enormous pillars—several meters in height—with enigmatic figures engraved on their surface, bas-reliefs with vultures, scorpions and other creatures and its entrance door surrounded by sculpted beasts awakens the imagination making us think of references to the world of the dead or the spiritual.

Whoever built this sacred ancient temple made sure it would survive along thousands of years, by backfilling the various sites and burying them deep under.

So far, excavations and geomagnetic results revealed that there are at least 20 stone circles–temples—on the site, but with each new excavation, it seems that scientists learn a bit more about Göbekli Tepe.

Now, archaeologists have uncovered three human skulls with intentional incisions on their surface, leading experts to believe that this practice may be the first of its kind by Neolithic men. It is believed to have served to honor dead relatives or drive away enemies.

A recent study has revealed that the intricate stone carvings found at Göbekli Tepe are evidence that a comet impacted our planet sometime around 11,000BC, resulting in a set of cataclysmic events that may have wiped out wooly mammoths, and eventually giving rise to civilizations.

Interestingly, this idea was first presented by Graham Hancock in his book Magicians of the Gods before experts even decided to see if there was a connection between the symbols and constellations in the sky.

As we reported before, scientists analyzed the intricate stone carvings at Göbekli Tepe and asked whether the symbols carved onto the massive stone pillars are related to constellations.

Experts studied animal carvings made on one particular pillar known as the vulture stone and found that the animals are in fact astronomical symbols. With the help of sophisticated computer software, scientists matched the symbols to patterns in the sky, finding that they related to an event that occurred around 10,950 BC.

Now, archaeologist Julia Gresky and her colleagues at the German Archaeological Institute have discovered in Göbekli Tepe three fragments of skulls pierced with modifications never before seen among the human remains of the time.

Researchers believe that this is the first evidence of a Neolithic skull cult. 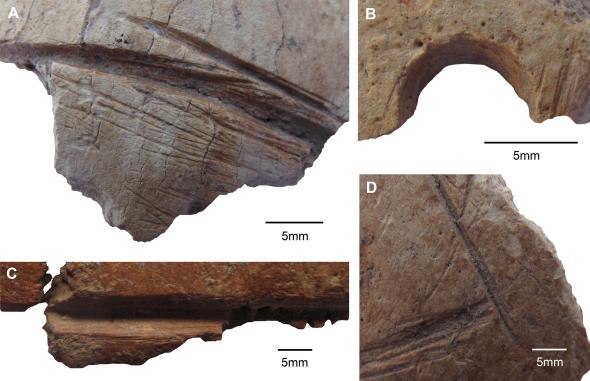 Post-mortem modifications in the Göbekli Tepe skulls include carvings (Figures A, C, and D) and a drilled hole (B).
PHOTOGRAPH BY JULIA GRESKY, DAI

Although there are scientists who trace the origins of trepanation— a surgical intervention in which a hole is drilled or scraped into the human skull—to the end of the Paleolithic, about 12,000 years ago, so far the first studies gave back an approximate age of around 10,000 years ago.

Throughout history, people have honored skulls for different reasons, from worshiping ancestors to believing that human skulls convey protective properties.

Anthropologists have described various types of cults of this type, each with its own modifications in the bones.

However, what Gresky’s team observed was one hitherto unknown.

This skull fragment shows a deep incision made with a flint tool some 10,000 years ago.
PHOTOGRAPH BY GERMAN ARCHAEOLOGICAL INSTITUTE

Each skull had deep incisions made intentionally along the sagittal plane. One of them also shows a perforated hole in the left parietal bone, as well as remains of red ocher.

By using different microscopic techniques to analyze the fragments, scientists verified that the carvings were executed with lithic tools, which excludes natural causes, such as mice or other animals having gnawed the bone.

Apparently, they first ripped off the scalp and then made the marks on the bone. Due to their depth, it is ruled out that they were provoked by deboning techniques.

According to the study’s authors, it is most likely that the skulls were carved to venerate relatives not long after their death or to be shown in order ward off enemies. The results are the first evidence of the treatment of the dead in the enigmatic ruins of the oldest temple on Earth, Göbekli Tepe.

While experts have found skull fragments on the site, they still have not actually found any bodies buried at the site. There is also no evidence that says people lived at the site.

However you put it, Göbekli Tepe is definitely one of the most ancient and mysterious sites ever excavated on Earth.

The new study was published in Science Advances.

ewao
share
Previous post Spirit Guides: The Higher Power that Looks Out for Us Next post A massive volcanic eruption may have influenced the collapse of Ancient Egypt