At the International Astronautical Congress in Adelaide, Australia, SpaceX founder r Elon Musk announced SpaceX’s most ambitious plans yet for the colonization of planets and satellites beyond Earth, including the establishment of a lunar base and a permanent Mars colony by 2022.

The founder of Tesla and SpaceX plans to launch two spaceships to the red planet in the next five years.

SpaceX, the aerospace company of Tesla’s founder Elon Musk, plans to launch its first cargo mission to Mars in 2022 and send humans to the Red Planet two years after that first mission.

This has been explained by Musk himself at the 68th International Astronautical Congress (IAC) in Adelaide, Australia.

The ambitious project of the Musk will be possible thanks to a new rocket that will replace the current fleet of Space X, the Falcon 9, the Falcon Heavy and the Dragon vehicle, with the aim of reducing costs as much as possible.

“I am almost convinced that we can finish the spaceship and have it ready for a launch in five years,” said Musk who seems to be convinced SpaceX and help mankind colonize the red planet in the near future. 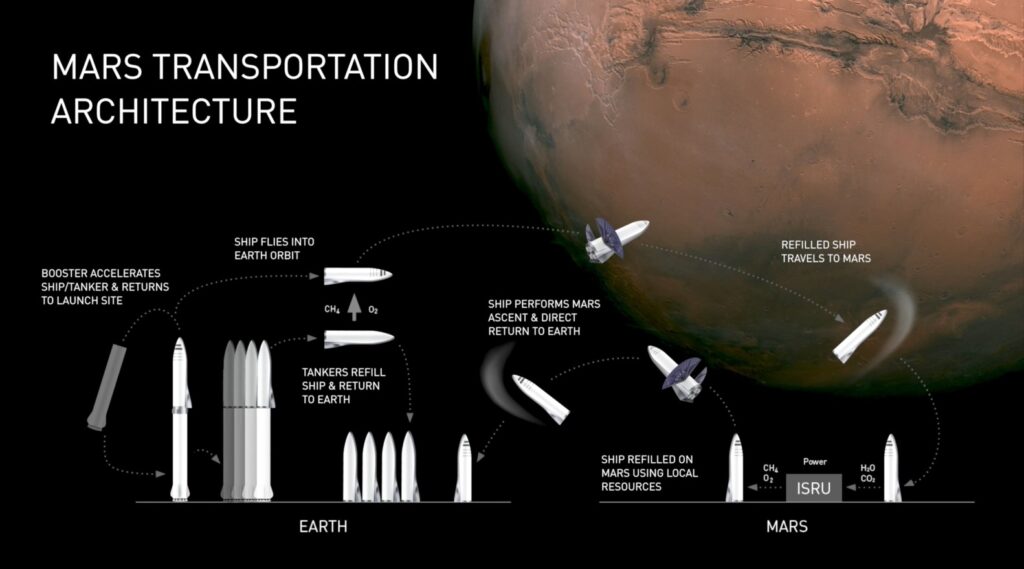 According to the schedule of the current plan of colonization of the company, the first trip of a rocket to Mars will be realized in 2022, but it will not be until 2024 when the first manned mission will take place.

After that the colonization of the planet will begin, with the construction of a city as the connections with Earth intensify.

Keep in mind that a trip to Mars takes between six and nine months.

The spaceship, which could hold up to 100 people, will not only be used to reach Mars.

The idea of Musk is that the ship also serves as fast transport on Earth since it could travel to most destinations on the planet in less than 30 minutes.

Big Fucking Rocket, the rocket that will colonize Mars

The new Space X rocket will be called Big Fucking Rocket, it will be nine meters in diameter, 48 long and will be completely reusable.

The 100 people who travel aboard the ship will be divided into more than 40 cabins.

The BFR will also include very spacious common areas and an entertainment system for astronauts.

But keep in mind, SpaceX is not the only company which plans a mission to Mars.

Lockheed Martin has been working on a concept to take astronauts into the orbit of Mars, called Mars Base Camp, and presented the details at the same conference in Australia where Musk spoke of the changes to his plans to reach the Martian surface.

The Base Camp concept is designed to integrate NASA’s Orion spacecraft and the Deep Space Gateway model that involves launching a small space station into the Moon’s orbit to serve as the basis for a mission to Mars or any other interstellar destination.

The Mars Base Camp would be part of the Deep Space Gateway around the Moon before being launched into the Martian orbit where Base Camp would orbit around Red Planet. However, it would also carry a spaceship to reach the surface of the red planet.

The reusable spacecraft can take up to four astronauts to the Martian surface and allow them to stay up to two.

The spacecraft would allow the team to travel back to the Mars Base Camp to prepare for the next mission.

ewao
share
Previous post Spanking Your Child May Have Serious Negative Effects on Their Personality & Lowers Their IQ Next post Hell On Earth: A Massive Crater In The Middle Of The Desert Has Been Burning For Decades