When Einstein Met Tagore: Conversation On the Most Important Questions Of Human Existence!

Albert Einstein is one of the most intellectual beings we’ve encountered in our cosmic lifetimes – along with Rabindranath Tagore.

Rabindranath Tagore was an Indian writer who touched the lives of thousands of people. While he typically wrote in Bengali, he often translates his own work into English. He won the Nobel prize for literature in 1913. Interesting enough, he was the first Asian person to win the award. Through his fiction, Poetry, dramas, essays, and aesthetics, he touched the lives of thousands of people. Just like Albert Einstein. These two men might be the most spiritually in touch people we’ve ever seen, and a conversation between them goes a long way.

On July 14, 1930, Albert Einstein welcomes Tagore into his Berlin home to have an important conversation. This conversation ended up being one of the most prestigious exchanges of words in history – almost. The conversation between the two focused on the definition of science, human consciousness, and some of the most important questions of our universe. Read it below! 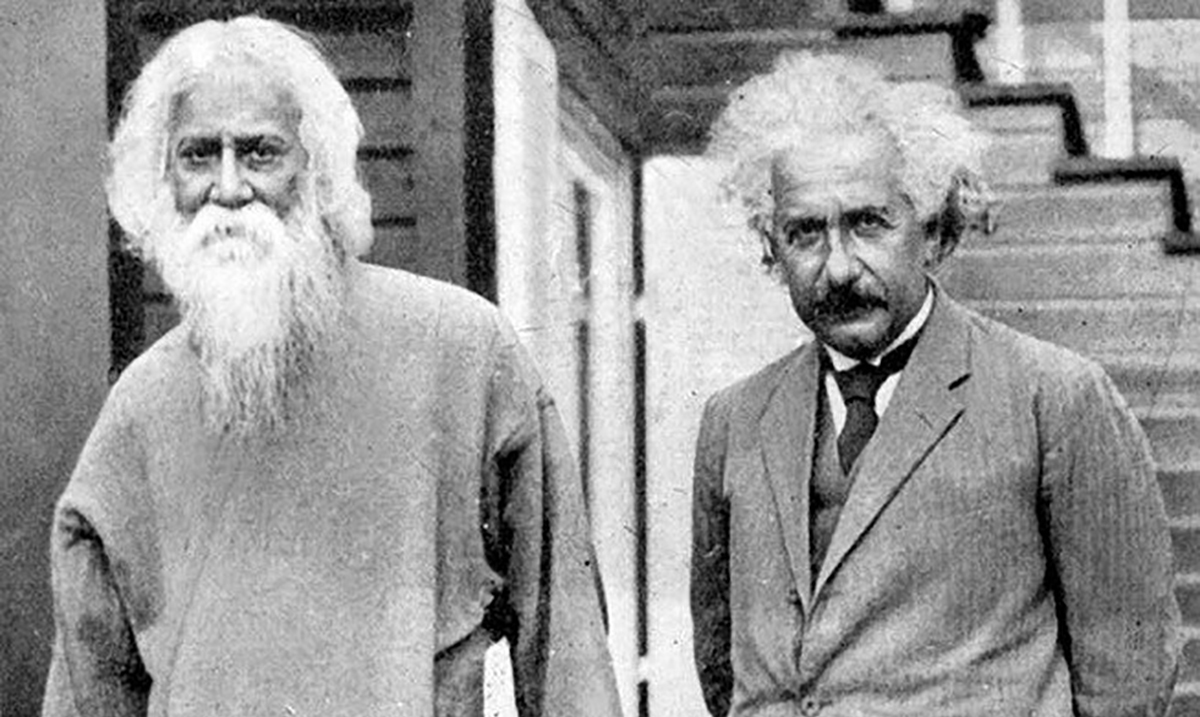 EINSTEIN: Do you believe in the Divine as isolated from the world?

TAGORE: Not isolated. The infinite personality of Man comprehends the Universe. There cannot be anything that cannot be subsumed by the human personality, and this proves that the Truth of the Universe is human Truth.

TAGORE: When our universe is in harmony with Man, the eternal, we know it as Truth, we feel it as beauty.

EINSTEIN: This is the purely human conception of the universe.

EINSTEIN: This is a realization of the human entity.

TAGORE: Yes, one eternal entity. We have to realize it through our emotions and activities. We realized the Supreme Man who has no individual limitations through our limitations. Science is concerned with that which is not confined to individuals; it is the impersonal human world of Truths. Religion realizes these Truths and links them up with our deeper needs; our individual consciousness of Truth gains universal significance. Religion applies values to Truth, and we know this Truth as good through our own harmony with it.

EINSTEIN: Truth, then, or Beauty is not independent of Man?

EINSTEIN: If there would be no human beings any more, the Apollo of Belvedere would no longer be beautiful.

TAGORE: Why not? Truth is realized through man.

EINSTEIN: I cannot prove that my conception is right, but that is my religion.

TAGORE: Truth, which is one with the Universal Being, must essentially be human, otherwise whatever we individuals realize as true can never be called truth – at least the Truth which is described as scientific and which only can be reached through the process of logic, in other words, by an organ of thoughts which is human. According to Indian Philosophy there is Brahman, the absolute Truth, which cannot be conceived by the isolation of the individual mind or described by words but can only be realized by completely merging the individual in its infinity. But such a Truth cannot belong to Science. The nature of Truth which we are discussing is an appearance – that is to say, what appears to be true to the human mind and therefore is human, and may be called maya or illusion.

EINSTEIN: So according to your conception, which may be the Indian conception, it is not the illusion of the individual, but of humanity as a whole.

TAGORE: The species also belongs to a unity, to humanity. Therefore the entire human mind realizes Truth; the Indian or the European mind meet in a common realization.

EINSTEIN: The word species is used in German for all human beings, as a matter of fact, even the apes and the frogs would belong to it.

TAGORE: In science we go through the discipline of eliminating the personal limitations of our individual minds and thus reach that comprehension of Truth which is in the mind of the Universal Man.

EINSTEIN: The problem begins whether Truth is independent of our consciousness.

TAGORE: What we call truth lies in the rational harmony between the subjective and objective aspects of reality, both of which belong to the super-personal man.

EINSTEIN: Even in our everyday life we feel compelled to ascribe a reality independent of man to the objects we use. We do this to connect the experiences of our senses in a reasonable way. For instance, if nobody is in this house, yet that table remains where it is.

TAGORE: Yes, it remains outside the individual mind, but not the universal mind. The table which I perceive is perceptible by the same kind of consciousness which I possess.

EINSTEIN: If nobody would be in the house the table would exist all the same — but this is already illegitimate from your point of view — because we cannot explain what it means that the table is there, independently of us.

Our natural point of view in regard to the existence of truth apart from humanity cannot be explained or proved, but it is a belief which nobody can lack — no primitive beings even. We attribute to Truth a super-human objectivity; it is indispensable for us, this reality which is independent of our existence and our experience and our mind — though we cannot say what it means.

TAGORE: Science has proved that the table as a solid object is an appearance and therefore that which the human mind perceives as a table would not exist if that mind were naught. At the same time it must be admitted that the fact, that the ultimate physical reality is nothing but a multitude of separate revolving centres of electric force, also belongs to the human mind.

In the apprehension of Truth there is an eternal conflict between the universal human mind and the same mind confined in the individual. The perpetual process of reconciliation is being carried on in our science, philosophy, in our ethics. In any case, if there be any Truth absolutely unrelated to humanity then for us it is absolutely non-existing.

It is not difficult to imagine a mind to which the sequence of things happens not in space but only in time like the sequence of notes in music. For such a mind such conception of reality is akin to the musical reality in which Pythagorean geometry can have no meaning. There is the reality of paper, infinitely different from the reality of literature. For the kind of mind possessed by the moth which eats that paper literature is absolutely non-existent, yet for Man’s mind literature has a greater value of Truth than the paper itself. In a similar manner if there be some Truth which has no sensuous or rational relation to the human mind, it will ever remain as nothing so long as we remain human beings.

EINSTEIN: Then I am more religious than you are!

TAGORE: My religion is in the reconciliation of the Super-personal Man, the universal human spirit, in my own individual being.

ewao
share
Previous post My Precious—Ancient Ring That Inspired Tolkien’s The Hobbit Found In The U.K. Next post Study Shows Cancer Is Almost Nonexistent In Amish Communities, The Reasons Will Shock You