Written in STONE—3,700-year-old Babylonian tablet is OLDEST evidence of Trigonometry

Researchers say: “The tablet not only contains the world’s oldest trigonometric table, it is also the only completely accurate trigonometric table, because of the very different Babylonian approach to arithmetic and geometry. This means it has great relevance for our modern world.”

The ancient Babylonians—who inhabited modern day Iraq from around 4000 BCE were considered as one of the most advanced ancient societies to ever live on Earth.

However, we probably didn’t know just how advanced they were until we came a cross the worlds first tablet that evidently shows how the Babylonians beat the ancient Greeks, by at least 1000 years in mastering Trigonometry.

Australian researchers believe they have finally decoded the inscriptions on a 3,700-year-old ancient Babylonian tablet referred to as Plimpton 322. Relatively well-preserved, the ancient tablet’s left-hand edge is broken. 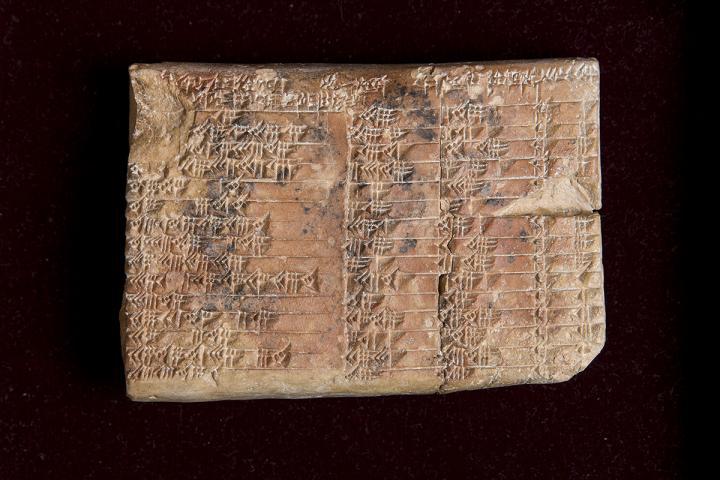 The message written in stone demonstrates and confirms that the ancient Babylonians were way ahead—by at least a thousand years—of the Greeks in the invention of trigonometry (the study of triangles) and shows a sophisticated and ancient mathematical knowledge that had remained hidden until now.

It is believed that this small tablet originates from the ancient Sumerian city of Larsa and was discovered in the early 1900s in what is now southern Iraq by the archaeologist, academic, diplomat and antique dealer Edgar Banks, the person on which the fictional character Indiana Jones is based.

Currently, the ancient tablet remains in the Rare Book and Manuscript Library of Columbia University in New York.

The tablet has numerous engravings written on its surface in ancient cuneiform showing four columns and 15 rows of numbers that follow an original sexagesimal system instead of the decimal system with that we use today.

The figures describe a sequence of 15 right-angle triangles, which are steadily decreasing in inclination.

Furthermore, researchers claim that Plimpton 322 originally had six columns and probably had to consist of 38 rows of cuneiform characters.

Speaking about the discovery and the message the tablet carries, Dr. Daniel Mansfield, an associate lecturer in Mathematics, UNSW said:

“Plimpton 322 has puzzled mathematicians for more than 70 years since it was realized it contains a special pattern of numbers called Pythagorean triples. The huge mystery, until now, was its purpose – why the ancient scribes carried out the complex task of generating and sorting the numbers on the tablet. Our research reveals that Plimpton 322 describes the shapes of right-angled triangles using a novel kind of trigonometry based on ratios, not angles and circles. It is a fascinating mathematical work that demonstrates undoubted genius.”

The new study, composed by Dr. Mansfield and associate professor Norman Wildberger, is published in Historia Mathematica, the official journal of the International Commission on the History of Mathematics (ICHM).

After studying Babylonian mathematics, and examining various possible historical interpretations of the ancient tablet, researchers believe how one “widely-accepted” theory is that the tablet was sued as a teacher’s aid to check students’ solutions to quadratic problems.

However, Mansfield and Wildberger believe that the tablet was considered as an ancient calculator for different complex trigonometric equations.