Most people are familiar with the megalithic stone monument called Stonehenge, located in Wiltshire, England. Some are even aware that the protruding portion of the stones may only indicate the remnants of deeply buried, massive rocks which go far below the surface of the earth – a monument under a monument four times the size of Stonehenge itself.

Few people have heard of the mysterious golden lozenge that an archeologist unearthed at a Stonehenge gravesite.

At a burial site overlooking Stonehenge, the great Bush Barrow King who lived more than 4,000 years ago was buried with some of his most prized belongings. Among the king’s belongings was a beautiful, solid gold buckle.

“We found the skeleton of a stout and tall man. On approaching the breast of the skeleton, we found immediately on the breast bone a fine plate of gold. This article in the form of a lozenge was fixed to a thin piece of wood, over the edges of which the gold was wrapped.” 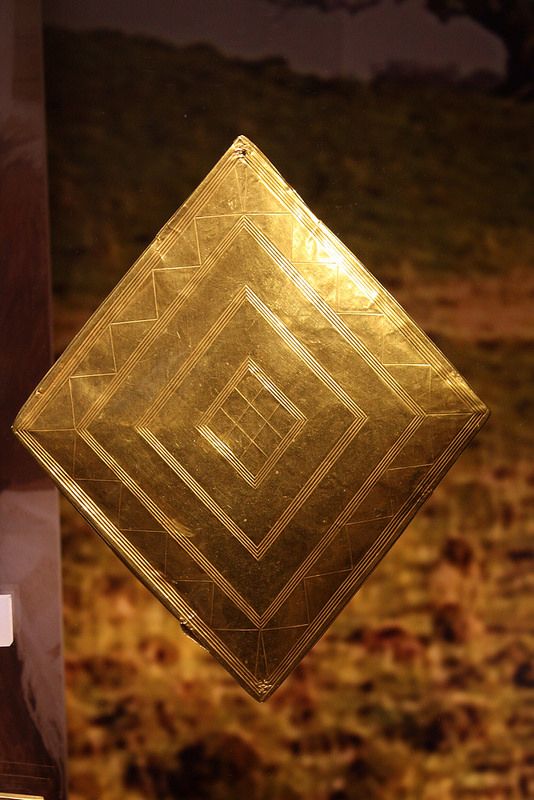 The golden buckle found at a Stonehenge gravesite.

The golden lozenge has been called the “crowned jewel” of the King of Stonehenge. It has many names – golden lozenge, gold buckle, and others but it’s a weirdly shaped trapezoid with perfect etchings that indicate a sophistication of knowledge we don’t often assign “primitive” cultures.

The golden buckle only recently was put on display at the Wiltshire Heritage Museum, along with other gold items in what has been named the “mysterious golden age of England.”

The king was likely a priest or chieftain who worshipped inside Stonehenge, itself, with ancient knowledge of the megalith’s powers.

In an age known for the invention of the wheel and ox-born cart, metallurgy was in its infancy – or so historians have told us, yet, even with the eventually prevalence of bronze in the Bronze age, gold was truly rare.

Moreover, the golden lozenge is covered in a symmetrical pattern which indicates the makes was well versed in geometry and mathematics.

Other astounding finds from the Bronze Age include artifacts like a gold-tipped, bronze sword, heralding the earliest “myths” of the Celtics who often mentioned the brilliance and reflectivity of the metal. And though visually impactful, these artifacts look very different from the golden lozenge.

However, the golden lozenge is likely a preeminent example of what Sir Isaac Newton and Aldous Huxley have called the “perennial philosophy” or eternal knowledge encompassing spiritual and scientific wisdom which societies – particularly starting with the Bronze Age – seemed to possess.

This sophisticated knowledge included subjects ranging from agriculture to architecture, metaphysics to physics, and harmony and healing. This knowledge served the city dweller, yet also kept us close to nature, with a respect for Nature, and the natural world. This golden amulet – the golden buckle – is evidence of a time when we knew much more than we’ve given ourselves credit for.

ewao
share
Previous post The Evolution of Man—Mainstream History’s timeline VS The Anunnaki timeline Next post Ancient Kailasa Temple Exposed: 30 Mind-Bending Images of A Temple Carved Out of A Mountain