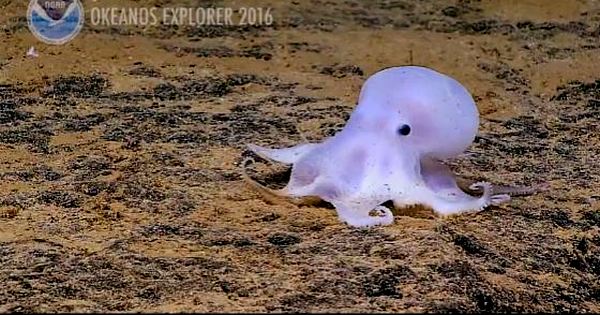 The National Oceanic and Atmospheric Administration was collecting geological specimens off the coast of Hawaii when they discovered a brand new species in the adorable octopod family that you will still never get to hug.

The creature is particularly notable for it’s translucent, glowing whiteness. Its skin appears to have no pigment, and when you watch the video below you can see it calmly drifting along the sea bed like a tea light, occasionally wrinkling up as it thinks about flitting away. I’m anthropomorphizing it, but can you blame me? It’s so gosh darn cute:

NBC News reports that this is a “new species is an incirrate octopod, meaning it lacks fins and cirri — finger-like parts associated with suckers on its arms.” Less suckers is good, just in case you ever need to fight one. You might, who knows, though it is at a depth of 14,000 ft, much deeper than this type of cephalopod has ever been found before.

Scientists aren’t sure how big it is either, because it was discovered on camera by Okeanos, a converted United States Navy ship that’s used as an exploratory vessel in different parts of the world. You can actually watch their camera feed live, though it’s mostly water and only rarely awesome stuff like this:

Now, the only question that remains is if this Casper the Friendly Ghost species is as cute or cuter than this new species:

Thanks to Distractify for this article

theopenmind
share
Previous post A Couple Couldn’t Decide Which Dog To Save So They Bought The Entire Shelter Next post Tilikum, SeaWorld’s Notorious Killer Whale, Is Near Death