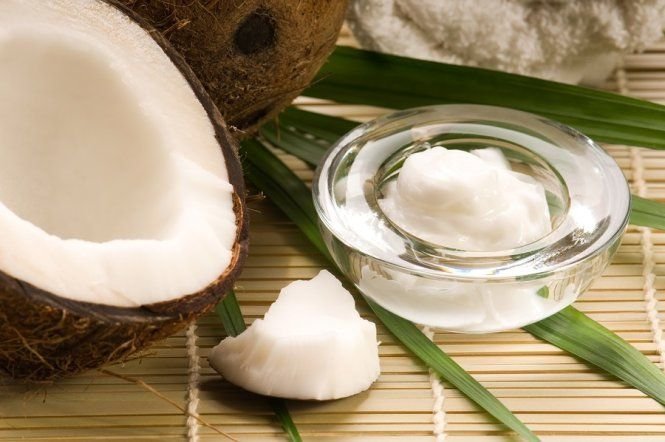 Coconut oil has made the journey from villain to victor in the health food world.

What used to be deemed an evil saturated fat, dangerous for anyone worried about heart disease and high blood pressure, has become a healing nourishing substance soaring in popularity.

How did such a drastic change come about? What made people change their minds about the numerous benefits of coconut oil?

This story is tied in with the saturated fat myth that to this day runs rampant spreading misconceptions.

The myth that saturated fats makes you fat, came about in the late 1970’s. People were led to believe from health authorities that foods high in saturated fat were to be avoided. Foods such as butter, egg yolks, animal fats and of course, coconut oil.

The premise behind this notion is that saturated fat would raise LDL cholesterol, which in turn would clog the arteries and lead to heart diseases. Many studies were done, however they all had one fatal flaw.

The studies showing a link between saturated fats and heart disease were also grouping trans fats into the same category. Trans fats are fat molecules which have literally been transformed, such as the hydrogenation process vegetable oils undergo to become margarine.

Trans fatty acids can be linked to heart disease and other health problems, but it certainly isn’t fair to put naturally occurring saturated fats in the same category.

Since the hay day of the saturated fat myth, more and more scientific evidence is being released to prove just the opposite. Many indigenous cultures around the world value saturated fats for their nourishing properties.

The Maasai tribe in Africa drink full fat raw milk in abundance, in China women who can afford to are encouraged to eat up to 10 eggs per day.

Take a look at the Inuit of Northern Canada, they used to survive harsh winters eating mainly seal blubber and fish. Modern science is starting to see that the diets of our ancestors were far more balanced, you didn’t have any incidence of the diseases we are facing today.

Ancestral diet has a huge role to play in this, and as you can see, our ancestors weren’t afraid of a little fat.

Coconut oil is a great fat to cook with because it’s structure remains intact when heated. It doesn’t produce harmful by-products like most common cooking oils. (1)

2. Coconut Oil as a Substitute for Butter

Use coconut oil to replace butter in recipes, you can make anything from pie crust to brownies, rich sauces and curries. The flavor isn’t overbearing but you may get a faint tropical taste, most recipes that use any spices will cover up the taste of the coconut oil.

3. Great for Vegan and Paleo

Coconut oil is a key ingredient in most vegan raw pies and paleo treats, because it solidifies at room temperature (77f) it keeps treats firmly intact, giving them a great texture and taste (2).

Add coconut oil to smoothies to make the nutrients in your fruits and vegetables more absorbable and also aid in balancing blood sugar. If you’re eating steamed veggies, be sure to generously coat them in coconut oil and good sea salt as the fat soluble vitamins will absorb far more efficiently (3).

Mix with equal parts cacao powder and honey for a natural chocolate sauce, or allow it to set in the fridge in molds for healthy homemade chocolate treats (4).

Take a tsp. of coconut oil before meals to feel more satiated.  This may be because of the way fats are metabolized in the body.  Science has revealed that ketones (that are produced when you consume coconut oil) can lead to increased appetite reducing effects. (5, 6, 7)

Coconut oil is a healthy nourishing fat for providing your adrenals and thyroid with real nourishment for more balanced hormone levels (8, 9).

The MCT’s (medium chain triglycerides) in coconut oil create a sustained energy release for long term energy and also help boost metabolism and speed fat loss (10). Medium chain fatty acids aren’t stored as fat in the body, they are utilized immediately by the liver as a source of energy (11).

Coconut oil releases over the course of many hours in the body, providing a solid energy source to help sustain blood sugar levels.  A 2010 issue of the “Indian Journal of Pharmacology” published an animal study which discovered a diet supplemented with coconut oil led to improved glucose tolerance levels, as well as decreasing total cholesterol levels. Researchers said attributed effect to the presence of lauric acid, an MCT, in coconut oil (12). No more roller coaster ride once you’ve incorporated this healing fat in your day to day life.

Studies show the powerful effects coconut oil has on brain health (13). We can see it is incredibly useful in treating and preventing Alzheimer’s as well as just helping the average person to feel sharper and more alert.

Melt a tsp. of coconut oil in hot lemon water to soothe an itchy irritated throat.  This will differ from person to person and most evidence was anecdotal.

13. Treament for Ear Aches and Infection

Simmer a bit of coconut oil with a garlic clove and use this anti bacterial (15) oil in the ear.

Candida Albicans is a yeast and a parasite which steals vital energy from the body. The lauric acid in coconut oil helps kill off candida. (16)

Roughly half the fat in coconut oil is lauric acid, a substance that converts into monolaurin, a monoglyceride which can annihilate lipid coated viruses (17), gram-negative bacteria and protozoa. Making it an effective treatment for ailments such as herpes virus, giardia lamblia, HIV and measles just to name a few.

Taking coconut oil with a meal can help digestion as it lubricates the digestive tract allowing digested food to pass through much easier.

You can use coconut oil to heal burns faster and provide instant soothing relief (19).

Coconut oil helps to rebuild the gut walls and provides a mucilaginous effect to aid in easily digesting and passing food (20).

20. Getting rid of lice when combine with anise seed extract

One study showed that combined these are more effecting than the common lice treatment permethrin (21).

Coconut oil has been shown to reduce inflammation in animal testing (22). Researchers also found that coconut oil has moderate analgesic activity and can help reduce swelling and relieve pain.

One of the best foods for healthy hormones, not only is coconut oil useful in regulating the thyroid and adrenal glands but it’s also been found to lessen the incidence of prostate cancer (23).

Shine you shoes with a dollop of coconut oil on a dry rag for an all natural, petroleum alternative.

26. Use on your pets to keep fleas away

Just as coconut works for humans to kill lice, it also works on animals to get rid of pesky critters.

27. Make Your Own Baby Wipes

Either use a half of a paper towel roll or reusable fabric and soak them in a mixture of 1 C hot water, 1 TBS coconut oil and 1 TBS Castile soap. This is a great baby wipe solution that it both a disinfectant and has a soothing, moisturizing effect.

Even if you’re using amazing homemade baby wipes, the little ones can still get diaper rash, coconut oil is soothing and effective at relieving discomfort for your little one.

Try warming the coconut oil in a double boiler with your favorite essential oils, this makes for a luscious spa like massage experience.

Apply coconut oil to warts daily and cover with a band aid. As mentioned above, the coconut oil is exceptional at infiltrating  fungal infections and over the course of a month the warts should disappear.

Combine equal parts sugar and coconut oil, you can add your favorite essential oils and use this as a body scrub while in the shower

You can use coconut oil on your entire body as a moisturizer, it’s great for nourishing the skin and preventing acne. Many people use it to prevent wrinkles as a facial moisturizer

So lather up before heading to the beach, you’ll still be able to absorb beneficial vitamin D from the sun, which isn’t the case with regular sunblock (24).

Coconut oil is a wonderful alternative to petroleum based lubes. Though it should be noted that if you’re using latex condoms coconut oil has the potential to weaken the latex, so instead opt for polyurethane.

Apply coconut oil to feet daily after a shower, for an extra anti-fungal effect mix in a few drops of tea tree essential oils (25).

As a pre-shampoo hair treatment, coat hair in coconut oil the night before a morning shower (make sure to wear a shower cap to bed) concentrate the oil on the ends for super silky locks.

Next time you run out of chap stick, try melting 1 1/2 Tbs of coconut oil with your favorite essential oils and 1 tsp of beeswax. Fill the chap stick tube with the melted oil and allow it to come to room temperature before using.

Try a scalp treatment with coconut and rosemary essential oil to treat dandruff, simply massage the combined oils into the scalp and allow it to seep in overnight. Wash hair as usual in the morning and repeat until the problem subsides (26).

Amazing that something so simple could be so effective in calming the inflammation associated with shaving.

Apply directly to any bug bite to help soothe the itch and relieve swelling.

Coconut oil is an impressive eye makeup remover, it dissolves gucky mascara in an instant leaving your skin moisturized and clean.

Ayurveda an ancient Indian medicine system, states coconut oil to be a cooling oil, it can provide great relief to burning itchy skin. Another great sunburn remedy is apple cider vinegar mixed with water, sprayed on the skin and allowed to dry. Apply coconut oil after ACV for even greater relief.

Both internally and externally, coconut oil is excellent for treating acne. From the inside it helps to balance hormones associated with causing acne. Externally you can apply it to pimples for the anti bacterial effects as well as reducing swelling and redness.

If you want to completely avoid razor burn try using coconut oil instead of shaving cream.

Starting about a month before giving birth, massage the perineum with coconut oil to prevent tearing or necessity of episiotomy .

Apply a little coconut oil to your lashes before bed, this is especially useful if you wear eye makeup as it can cause hair loss and breakage over time.

You can easily make your very own soap with just 3 ingredients and a crockpot check out this excellent photo tutorial for full instructions over here.

Apply coconut oil daily to varicose veins and massage in really well, anecdotal reports show this to be an excellent method for dealing with varicose veins naturally.

Forget about bringing that jug of gasoline on your camping trip. Instead try soaking a few cotton balls in coconut oil and using them as a fire starter.

54. Save money and buy in bulk

It takes a very long time for coconut oil to go rancid and now that you know how awesome it is you’re going to want to use it a lot!