Food & Diet, How To, Lifestyle 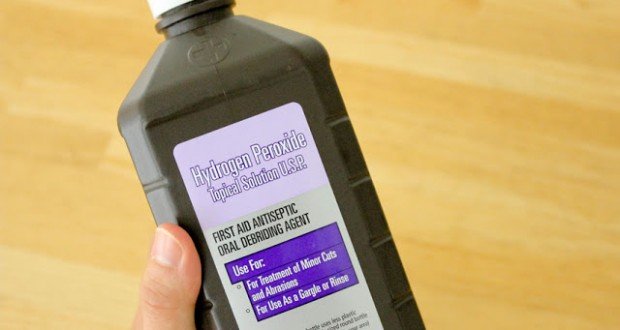 Hydrogen peroxide is one of the world’s safest all-natural sanitizers in your home. You’ve probably got it under the bathroom sink, in your linen closet or tucked away somewhere near your first aid kit. It’s time to pull it out and use it for cleaning, disinfecting and more.

Chemically called H202 — a mix of water and oxygen — hydrogen peroxide kills disease and microorganisms by oxidation, which is something like a controlled burning process. That’s why you’ll see it bubble away many of your household troubles.

Typically, a three percent mix of hydrogen peroxide is enough to work wonders for health, beauty and cleaning your kitchen and bath, and can be purchased for about a dollar. There are potentially hundreds of uses for hydrogen peroxide, but for a start, here are 30 ways to use it in your home.

1. Clean makeup brushes. Makeup brushes can be a pain to clean — but not with peroxide. Use one part water with one part hydrogen peroxide in a container, soak synthetic brushes for about five minutes and rinse. Dermatologist Dr. Debra Luftman suggests repeating this process at least once each week for clean, bacteria-free brushes.

2. Douche. Add two capfuls of hydrogen peroxide into warm distilled water once or twice a week to get rid of bacterial infections or even chronic yeast infections. (While some people swear by it, your doctor may not agree with this method, so it’s best to discuss treatment with her or him beforehand.)

3. Treat sinus infections. Use a tablespoon of hydrogen peroxide in one cup of chlorine-free water as a nasal spray. Adjust the amount of peroxide depending on the severity of the infection.

4. Relieve toothaches. It’s not a painkiller, but peroxide is an antiviral, antibacterial and antifungal agent, so it’s great for treating the pathogen causing an infection. For a toothache, rinse your mouth with hydrogen peroxide several times a day. You also can rinse with coconut oil once per day, and your discomfort should vanish quickly.

5. Whiten teeth. Mix baking soda and hydrogen peroxide to make a homemade tooth whitener. When used daily, it can remove stains from teeth.

6. Disinfect small wounds. A natural antiseptic, hydrogen peroxide is effective for cleaning wounds to prevent an infection from setting in.

7. Mouth rinse. Use a capful of hydrogen peroxide as an antiseptic mouth rinse to help whiten teeth and kill germs that cause halitosis.

9. Highlight hair. Get a sun-streaked look by spraying peroxide on damp hair and allowing it to soak for 10 to 15 minutes before rinsing.

10. Whiten nails. Soak your fingertips and toes in peroxide to naturally whiten your nails.

11. Clear complexion. Use peroxide as a facial rinse to kill the bacteria that leads to acne, get rid of pimples fast and clear up your complexion.

14. Relieve ear infections. Put six to eight drops of hydrogen peroxide in each ear to alleviate symptoms and help clear up an ear infection.

For the kitchen, laundry and bath

16. Clean the refrigerator and dishwasher. Because it’s non-toxic, hydrogen peroxide is a wonderful cleaner anywhere you store food and dishes. Simply spray the appliance outside and in, let the solution sit for a few minutes, then wipe clean.

17. Clean sponges. Soak sponges in a 50/50 mixture of hydrogen peroxide and warm water in a shallow dish for about 10 minutes. Then thoroughly rinse the germ-free sponges and allow to air dry.

18. Remove crud from pots and pans. Mix hydrogen peroxide with enough baking soda to make a paste, then rub onto the dirty pan and let it sit for a while. Return with a scrubber sponge, apply warm water and the cooked-on crud will rub right off without scratching or scraping.

19. Clean cutting boards. Kill bacteria that can live on produce with mild hydrogen peroxide and household vinegar. Spray with hydrogen peroxide, then with white vinegar and rinse well. A test performed by a food scientist at Virginia Polytechnic Institute and State University found that the combination of the two solutions killed bacteria like E. coli, listeria and salmonella better than peroxide or vinegar alone. It kills every microbe, so you won’t spread nasty germs to your countertops.  This solution also won’t leave behind any lingering odors or taste.

21. Whiten grout. If your tub and tile grout looks grubby, spray on peroxide, let it sit for a while and then scrub with an old toothbrush. You may have to repeat this process a few times. You also can mix hydrogen peroxide with white flour or baking soda to create a thick paste, then apply to grout and let it sit for a few hours. It will look nearly new when you rinse it off.

22. Clean toilet bowls. Pour about half a cup of hydrogen peroxide into toilet bowls and let it soak for at least 30 minutes to clean and remove stains.

23. Remove tub and shower scum. Spray hydrogen peroxide on soap scum, dirt and stains in the bathtub. Let it sit for at least 30 minutes, then rinse to loosen grime and make cleaning easier.

25. Clean glass surfaces. Spray hydrogen peroxide on dirty mirrors and other glass surfaces to loosen dirt and grime. Wipe away with a clean, lint-free cloth.

27. Whiten and brighten laundry. Ditch the expensive non-bleach whiteners by adding about a cup of hydrogen peroxide to your wash water and soak fabrics for 15 to 30 minutes to revitalize dingy or yellowed whites or to brighten colors.

30. Clean rugs and carpets. Spray hydrogen peroxide onto light-colored carpets and rugs to remove stains from mud, food, etc. Just remember that hydrogen peroxide will bleach some fabrics, so it’s best to test this technique on an inconspicuous area first.

Check your inbox or spam folder to confirm your subscription.

Category: Food & Diet, How To, Lifestyle