Scientists have found conclusive evidence of an unknown human species from which no fossil records have ever been found. It is considered a ‘ghost-species’ that interbred with humans thousands of years ago. 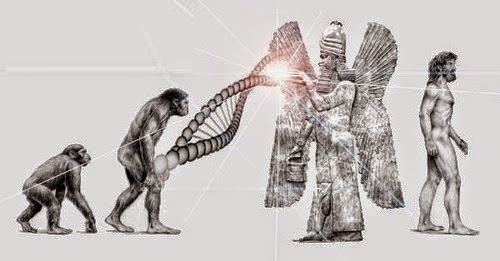 Are the Ancient Anunnaki the missing link in our amnesic history?

Researchers suggest that a protein present in present sub-Saharan populations indicates that in the distant past humans cross-bred with a “ghost species”.

It is believed that members of different species do not reproduce among each other, or that if they do, they don’t usually have fertile offspring (as happens with mules or ligers).

But the past of the human species shows that our history is far more complicated.

It is becoming increasingly clear that archaic human species, such as Neanderthals, Denisovans, and Sapiens, crossbred and had fertile offspring.

And that’s despite the fact that they are said to be different species.

A new research presented in Molecular Biology and Evolution has uncovered traces of one of these interesting encounters. The research was led by Gokcumen and Stefan Ruhl, DDS, Ph.D., a professor of oral biology in UB’s School of Dental Medicine.

The evidence has been discovered by chance in the saliva of modern humans, and point to the existence of a ghost human species, which means that it lacks fossil evidence that proves its existence, but points how the ‘ghost species’ reproduced with the ancestors of current sub-Saharan populations.

“It seems that interbreeding between different early hominin species is not the exception — it’s the norm,” says Omer Gokcumen, Ph.D., an assistant professor of biological sciences in the University at Buffalo College of Arts and Sciences.

“Our research traced the evolution of an important mucin protein called MUC7 that is found in saliva,” he wrote. “When we looked at the history of the gene that codes for the protein, we see the signature of archaic admixture in modern day Sub-Saharan African populations.”

Previous research has shown how archaic human species crossbred in Asia and Europe, and this study shows that it also occurred in Africa, where the first humans are said to have appeared.

“It seems that the crossing between different early human species is not an exception, but the norm,” Gokcumen suggested.

Experts were aware that the MUC7 protein gives consistency to the human saliva and adheres to microbes, most likely preventing attacks to the body. However, this time, this protein has allowed scientists to make a shocking discovery by chance.

To get to the bottom of the matter, researchers decided to go through a database of 2,500 modern human genomes in order to analyze the sequences that produce the MUC7 protein.

Thanks to that, scientists observed that present Subsaharan populations have a variant of this gene which differs from other modern humans.

In addition, the variants present in sub-Saharan Africa resemble those of Denisovans and Neanderthals, suggesting that this gene is a trace left by an unknown ancient species from which no fossil records have been found; that is, a phantom species.

“Based on our analysis, the most plausible explanation for this extreme variation is archaic introgression — the introduction of genetic material from a ‘ghost’ species of ancient hominins. This unknown human relative could be a species that has been discovered, such as a subspecies of Homo erectus, or an undiscovered hominin. We call it a ‘ghost’ species because we don’t have the fossils,” experts concluded.

Source: In saliva, clues to a ‘ghost’ species of ancient human