UFO hunters believe they have found another extraordinary UFO while going through bizarre images captured by the Solar and Heliospheric Observatory Images—a joint mission between NASA and the European Space Agency (ESA).

The planet-sized UFO—according to UFO hunters it’s the size of Jupiter—skimmed past the sun and can be seen changing direction as it approaches the star.

Russian website Pravda.ru, describes the massive unidentified object as being made up of three rings. (On that thought, remember Ezekiel’s Wheel UFO: Ezekiel 1:17: “15 Now as I looked at the living beings, behold, there was one wheel on the earth beside the living beings, for each of the four of them. 16 The appearance of the wheels and their workmanship was like sparkling beryl, and all four of them had the same form, their appearance, and workmanship being as if one wheel were within another. 17 Whenever they moved, they moved in any of their four directions without turning as they moved…”) 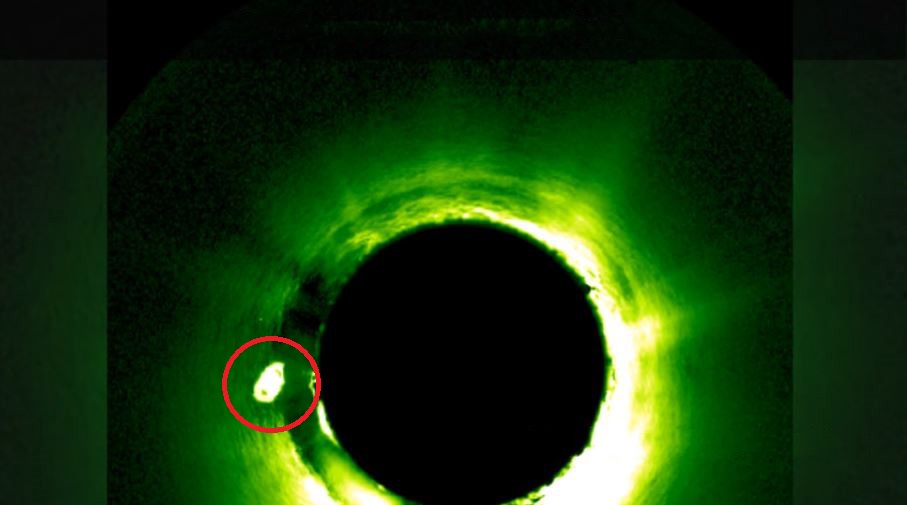 The ‘Mystery UFO’ is allegedly seen ‘interacting’ with the sun in this image.

However, despite the fact that there are many who believe the mystery object is nothing more than an error present in satellite images, there are those who seemed convinced that the object we see in the video posted below is a massive extraterrestrial ship, that passes near the sun in an effort to ‘refuel.’

The video posted onto YouTube by Paranormal Crucible shows the massive UFO approaching the sun, and as it ‘crashes’ into our star, a bright flash of light is generated. According to UFO hunters, this is a telltale sign that suggests that the object we see in the video was not the result of pixelations or errors in the satellite images, but a real object that managed to ‘interact’ with the sun.

Paranormal Crucible—a YouTube channel known to post different videos of UFO’s and the paranormal—suggests that the UFO may have been using the Sun as a ‘refueling station,’ as there are ‘satellite images’ which allegedly show a white spot, joined towards the sun’s surface by a connected line.

Soon after the video was posted online, different users and other channels picked up the news.

Streetcap1, a well-known ‘UFO hunter’ asked: Is this massive UFO feeding off solar energy? As he uploaded his version of the ‘encounter.’

“This is definitely a UFO shot out of the sun. It may have been using the sun’s energy to fuel itself or to recharge in some way, but it’s leaving at high speeds.”

He added: “This will imply that the craft is made from a different material that is resistant from the sun’s surface.”