It seems that there is evidence to support the fact that we’re all MARTIANS. According to several studies—one of them presented at the Goldschmidt geochemistry conference in Florence—there is evidence that life on Earth was in-fact kick started by a meteorite from Mars—carrying simple, RNA-based organisms. 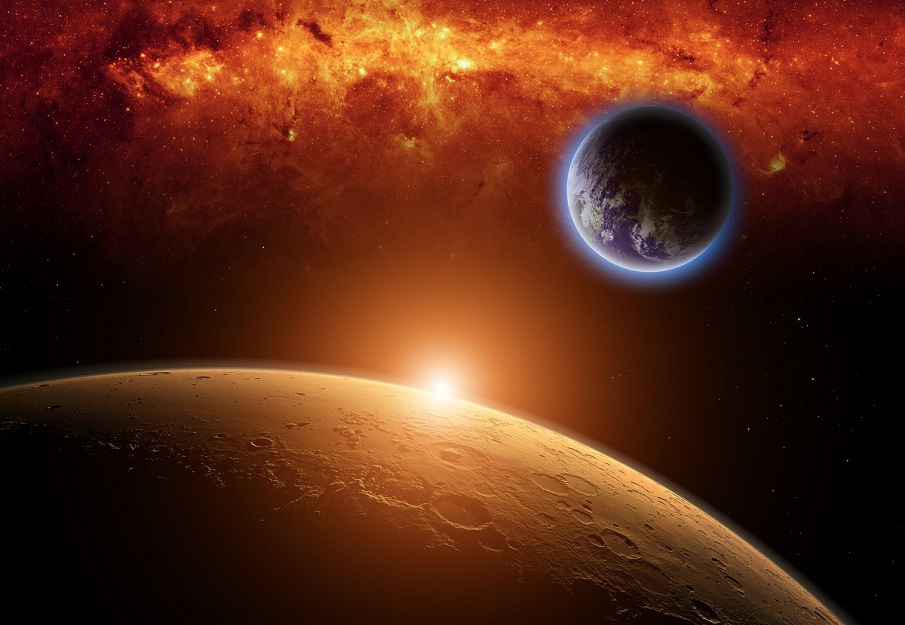 The same research indicates out that ancient Earth may have been inhospitable to the formation of building blocks of life and must have originated elsewhere, with Mars being the number one option.

This is according to Steven Benner of The Westheimer Institute for Science and Technology in Florida who believes that early Earth may have made it impossible for organic compounds to make the leap of life, while the conditions on Mars were IDEAL.

Professor Benner indicates that that RNA—the single-stranded, and non-helical version of DNA, which was most likely the first building block of life—was probably created in the presence of highly oxidized molybdenum and boron. Benner suggests that three billion years ago, on Early Earth—long before our planet had an oxygen-rich atmosphere—this form of molybdenum wasn’t anywhere to be seen.

Furthermore, Benner indicates that since our planet was covered completely in water—boron was nowhere to be found as is currently only found in extremely dry places.

Benner explains that on the other hand, Mars was the ideal place since around 4 billion years ago, Mars had an oxygen rich atmosphere and dry areas on the planet where boron could have formed in high concentrations.

“The evidence seems to be building that we are actually all Martians; that life started on Mars and came to Earth on a rock,” said Benner, speaking at the Goldschmidt 2013 conference in Florence, Italy. “It’s lucky that we ended up here nevertheless, as certainly, Earth has been the better of the two planets for sustaining life. If our hypothetical Martian ancestors had remained on Mars, there might not have been a story to tell.”

This offers possibilities for RNA-based organisms to have formed on Mars which could have eventually hitchhiked a trip to Earth.

Interestingly, a study performed by Columbia University scientists seems to agree with this theory.

The Panspermia hypothesis indicates that life exists throughout the Universe, distributed by meteoroids, asteroids, comets, planetoids, and also by spacecraft in the form of unintended contamination by microorganisms.

This way, it is possible that an asteroid collision may have caused a chunk of ‘life’ from Mars to end up on Earth.

In an interview with Business Insider, Caleb Scharf Astronomer, and director of the multidisciplinary Columbia Astrobiology Centre at Columbia University: “We can find pieces of Mars here on Earth and we suspect that there are pieces of Earth on Mars. If that material can carry living organisms on it, it’s possible that we are Martian.”

Peter Ward, a biologist at the University of Washington in Seattle said in an interview with New Scientist:

I think the case for Mars as the origin of Earth life is pretty good.’

Most importantly, Ward said that if we end up finding the ultimate evidence that life on Earth has an extraterrestrial origin, it would radically change scientific and religious thinking.

Ward added: “It’s a big blow. For some religious fundamentalists, it is an axiom that there is but one life and it is here on Earth.”

Not related to the above, but still noteworthy to mention, according to the co-discoverer of the DNA structure of the DNA molecule Francis Crick in 1953: “…organisms were deliberately transmitted to earth by intelligent beings on another planet. We conclude that it is possible that life reached the earth in this way, but that the scientific evidence is inadequate at the present time to say anything about the probability…” Furthermore, Crick’s thoughts on the theory that we are a result of ‘a bunch of molecules crashing into each other’ are that it is as likely as the assembly of a Jumbo Jet, hit by a hurricane in a junkyard.

In the book titled ‘Life Itself,’ Francis Crick states that there is NO POSSIBLE WAY that the DNA molecule could have kick-started on Earth and that it must have originated from elsewhere.

And while many disagree with the comments made by Francis Crick, it is still mind-bogglingg to think how life on our planet began elsewhere and was “somehow” transported to Earth.

In addition to all of the above, Professor Chandra Wickramasinghe, an astrobiologist at the University of Buckingham argues that Earth is entangled in an exchange process where Earth transfers—through different natural events—organic and living material with our planets and moon in the solar system.

In a paper published in 2015 in the Journal of Astrobiology, which Professor Wickramasinghe writes for, he outlined how he thinks life got to Earth.

“Recent studies have led to detections of some 900 exoplanets in a nearby small sample volume of our galaxy.”

“Extrapolations from this study give an estimate of 140 billion habitable planetary systems in our galaxy alone, most of these being associated with faint red dwarf stars. On such a basis the mean distance between life-friendly planetary systems is only a few light years.”

“This relatively short interplanetary distance is easily bridged by escaping dust, debris, meteorites and comets. Material expelled at speeds greater than the escape speed from a planetary system like our own solar system will, in general, have hyperbolic orbits with respect to a nearby star, so the probability of direct capture will in general be very low.”

“However, sub-micron dust including bacteria and viruses released by transiting cometary bolides, even if they are in hyperbolic orbits, will be easily be stopped by friction (gas drag) in the interplanetary disc of the recipient planetary system, and thus serve to infect habitable planets.”

The Copernicus Complex: Our Cosmic Significance in a Universe of Planets and Probabilities

What if … We came from space?